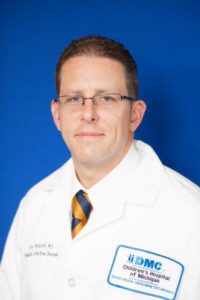 If your child’s cough has gotten progressively worse, it may be time to see a doctor. The Michigan Department of Health and Human Services and Oakland County Health Division are issuing a health advisory following an increase in the number of identified pertussis cases, commonly referred to as whooping cough. Anyone exposed to pertussis and displaying symptoms should be evaluated by a doctor to determine if antibiotics are needed.

Eric McGrath, M.D., infectious diseases specialist at DMC Children’s Hospital of Michigan explains that whooping cough, also known as pertussis, is a very contagious disease caused by a type of bacteria called Bordetella pertussis. “The initial symptoms can be confused with the common cold so parents need to be more concerned if the child’s cough becomes more extreme or an infant experiences a long pause in breathing,” he says.

Initially symptoms can include runny nose or congestion, sneezing, and possibly a mild cough or fever. After a couple of weeks, severe coughing can begin leading to coughing fits that continue for weeks. The coughing can become so extreme that the air is gone from the lungs and the infected person is forced to inhale with a loud “whooping” sound. In infants, the cough can be minimal or not even there. Infants may also experience apnea, which is a long pause in the child’s breathing pattern.

Dr. McGrath says that whooping cough can cause serious illness―especially in infants too young to be fully vaccinated. Serious complications can include pneumonia, convulsions, apnea (slow or stopped breathing), encephalopathy (disease of the brain) and even death in one percent of all cases.

The best way to prevent it is to receive immunizations. To be fully immunized, doses are given at 2, 4, 6, and 15 months. The last dose is given at 4 years old. Pregnant women are also encouraged to have a pertussis booster shot during each pregnancy (Tdap vaccine).

For those that have contracted whooping cough, doctors can prescribe antiobiotics to help treat the symptoms but mainly to reduce the risk of spreading the disease to others.

For further information or to schedule an appointment with a physician call (313)-745-KIDS.

About the Children’s Hospital of Michigan, www.childrensdmc.org
For 130 years, the Children’s Hospital of Michigan has been dedicated to providing high quality care to children and adolescents in a caring, efficient and family-centered environment. With more than 40 pediatric medical and surgical specialty services, the hospital draws patients from nearly every Michigan County, 39 additional states, and 22 countries, annually and provides the highest level of pediatric specialty care available for children. The hospital is a national leader in cardiology and heart surgery, neurology and neurosurgery, nephrology, and orthopedics. It is ranked as one of America’s best hospitals for children and sees more children than any hospital in the state. Children’s Hospital of Michigan is one of eight hospitals operated by the Detroit Medical Center (DMC).

Filed under: Healthcare, News
Share Tweet Pin G Plus Email
previous article: How to Arrange Your Home Recording Studio
next article: The Importance of Talent Management to reach the Pinnacle of Workforce Performance