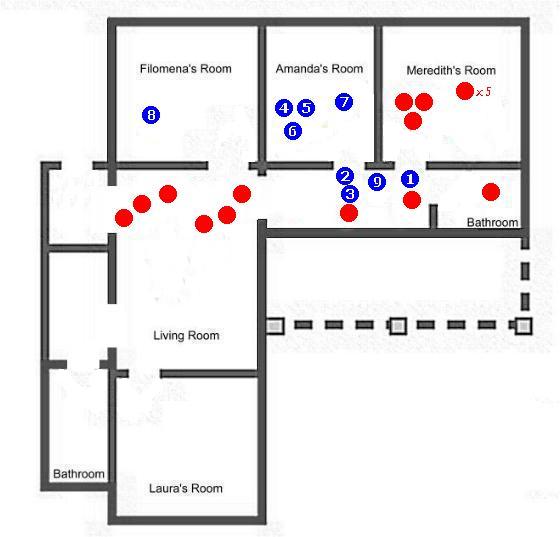 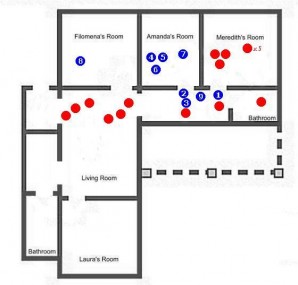 The red dots mark Rudy Guede’s shoe prints from his victims body to the exit, and his footprint in the bathroom. Random blue dots mark blurry Luminol false positive hits said to be footprints.

TOPIC: Perjury and withholding evidence, in regard to the so-called Bloody Footprints in the hallway, Filomena’s room, and Amanda’s room, said to belong to Amanda and Raffaele, maliciously used to convict the two.

…The following are my opinions, based on what I have learned about this case during the past four years, along with a paragraph I have quoted from the English translation of Judge Massei’s motivation report, issued following the conviction of Amanda and Raffaele, for the murder of Meredith Kercher on Nov 1, 2007, a student residing in an apartment in Perugia, Italy. with three other young women, one also a student, Amanda.

During the hearings leading up to the conviction of Amanda and Raffaele on Dec. 4, 2009, the prosecution repeatedly addressed the court, claiming bloody footprints belonging to Amanda, and Raffaele, were identified in the apartment where Meredith was murdered.

The judge continually refused the defense request for discovery, but finally gave in, so by order of the court the Scientifuc Police crime lab supervisor allowed the defense access to some of their files. The crime lab supervisor was too vacuous to destroy or conceal the TMB (reagent, tetramethylbenzidine) CSI chemical test results documents for the so-called bloody footprints, which confirmed blood was not present.

Previously when questioned about the presence of blood in the so-called bloody footprints in question, the Scientific Police witness testifying for the prosecution withheld the truth from the jury, in that TMB test had been performed, and all test results were negative for blood. Also the Scientific Police had previously withheld the TMB test results in their technical report presented to the court.

“With respect to the Luminol-positive traces found in Romanelli’s room, in Knox’s room and in the corridor, she[Sarah Gino] stated that by analyzing the SAL* cards “we learn, in contradiction to what was presented in the technical report deposited by the Scientific Police, and also to what was said in Court, that not only was the Luminol test performed on these traces, but also the generic diagnosis for the presence of blood, using tetramethylbenzidine, and this test, gave a negative result on all the items of evidence from which it was possible to obtain a genetic profile.” (page 64 hearing Sept. 26)

To understand this paragraph from Judge Massei’s motivation report, one must consider that the so-called bloody footprints said to be compatible with Amanda and Raffaele were found using Luminol, which always gives many false positives for blood, because Luminol reacts with many things commonly present everywhere (see footnote **). And blood contains a genetic profile (DNA), so the Scientific Police CSI only performed TMB test on the footprints that contained a genetic profile. They did not TMB test footprints that did not contain a genetic profile.

Standard practice: During a crime scene investigation conducted by the FBI, a TMB test of a Luminol find, is always conducted if the find is suspected of being blood. If it is negative, you end there. If it is positive, then you collect samples and go to the lab to subject the find to more rigorous testing. The point is that if you TMB test the find and it’s negative, then it’s not blood. Period. You might get a false positive, but not a false negative. A positive TMB test means that you go to the lab with samples. A negative TMB test means you stop. That is why the prosecution’s Scientific Police CSI witness testifying that the Luminol ‘hits’ were not tested for blood is ridiculous, an attempt to hide the truth from the court, and, in my opinion, perjury.

The authorities’ perjury was ignored by the judges, and going with the flow, the judge assumed without credible evidence the footprints were of blood regardless of scientific proof that they were not (see Massei Report, ET, page 284 for assumptions). Need I say more?

* An SLA card is similar to a work order/document used by the crime lab.

** (to name a few)
Luminol chemiluminescence can also be triggered by a number of substances such as copper or copper-containing chemical compounds, and certain bleaches; and, as a result, if a crime scene is thoroughly cleaned with a bleach solution, residual cleaner will cause the entire crime scene to produce the typical blue glow, effectively camouflaging any organic evidence, such as blood.

Horseradish sauce, via the enzyme horseradish peroxidase, catalyses the oxidation of luminol, emitting light at 428 nm (blue in the visible spectrum), which may result in a false positive.

Luminol will also detect the small amounts of blood present in urine, and it can be distorted if animal blood is present in the room that is being tested.

Luminol reacts with fecal matter, causing the same glow as if it were blood.

Luminol’s presence may prevent other tests from being performed on a piece of evidence. However, it has been shown that DNA can be successfully extracted from samples treated with luminol reagent.