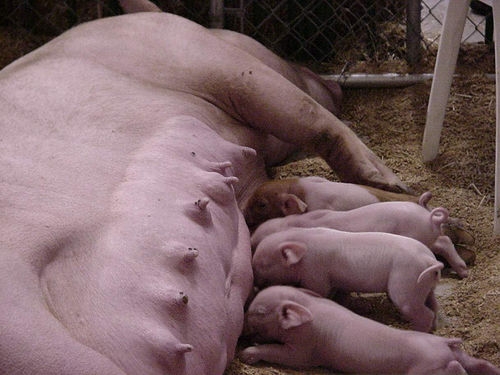 The FDA announced today
that it would give preliminary approval to lift a five year-old, informal ban
on including the meat or milk of cloned cattle, pigs and goats in the US food
chain. Sheep remain off-limits until more evidence is produced. Should this decision remain in place, the
United States would become the first nation on Earth to allow artificially
cloned meat and milk products for sale.

This is not the first time such regulations
have been proposed. In 2003, tentative
approval was granted but then withdrawn at the recommendation of the FDA’s own
advisory panel for lack of scientific evidence. Not the first Bush-appointed federal agency to be found adjusting
guidelines without compelling data, FDA was ordered to investigate the
matter. Three years later, the Draft
Risk Assessment released today is the follow up to the earlier fracas.

Today’s ruling, based upon the findings of a
team of federally selected scientists, will now undergo a public comment phase.
For at least three months, US citizens may give testimony regarding this
decision, as well as suggestions regarding labeling guidelines. Any
permanent decisions made will likely not be implemented until the latter half
of 2007.

Stakeholders in this debate include large
agribusiness firms, vertically integrated and invested in bioresearch as well
as the family farmers that subcontract through them. Bioresearch firms and the universities that train them would
benefit greatly from a federal seal of approval on their product. On the other side is an increasingly
distrustful American consumer and, as always, a small farmer or rancher, trying
to make ends meet. Those who trade
agricultural commodities may find themselves under pressure to refuse shipments
of US-produced animal products. Aid
organizations may have trouble convincing disaster stricken countries to accept
donations of milk products such as happened with GMO maize in some African
nations in recent years.

Currently the FDA does not intend to label
products containing cloned animals as the 700-page study judges them
"virtually indistinguishable" after 6-18 months, depending on
species. FDA guidelines for labeling changes pertain to foods that are demonstrably
different unless other legislation requires it. Fallout from this change could include other countries banning
unlabeled meat and dairy. It is likely
that many smaller and local vendors in the US will advertise not using such
animals in their products, such as milk now labeled “hormone-free.”

Many consumer advocacy groups are gearing up to
give this comment period the same attention as the first draft of the National
Organic Program that drew over 100,000 responses, sending the legislation back
for several years of rewrites. The
dairy industry itself reports 14% of women surveyed would stop drinking milk if
cloned cows were allowed to contribute to the supply. There continues to be no evidence that there is anything
inherently wrong with milk from such animals, but the process itself remains
unprofitable and has demonstrated genetic degradation that is passed on to
offspring as shortened life spans.

Further opposition has come from Capitol
Hill. Mounting congressional pressure recently included a letter to the
Secretary of Health and Human Services, the cabinet-level position responsible
for the FDA, to request special and careful consideration of this issue is
taken before declaring the ban lifted. It is likely that a legislated ban
could be proposed should the rule-change go through. The signatory legislators have today reiterated their request for
a careful and open comment period.

Despite an industry-wide acceptance of the ban,
many thousands of clone offspring have already made their way into the food
chain, as there has been no formal or informal ban on artificially inseminating
with clone sperm. Exceptions such as
this cause detractors to criticize the current administration’s policy of non-binding
industry self-regulation.

Proponents of the still fledgling livestock
cloning industry insist there is a need for standardized product in an
increasingly industrialized agricultural setting. Though this still represents less than a single percent of the
animals used for meat or milk in the US, many consumers worry not only how the
products from these animals will impact their health, but also what sort of
agriculture depends on such experimental creatures.

The numbers of cloned animals in the United
States remains quite low – fewer than a thousand cows and pigs — in part, due
to the cost and effort still required when producing a cloned animal.
Abnormalities in cloned animals mean many clones and surrogate mothers die as a
result, but when it works, it works well as a replacement for skilled animal
husbandry. The skill of a specialized breeder can be replaced when a champion
line becomes a champion clone. Farming
operations with razor-thin per-animal margins will try to cut expensive labor costs
wherever possible.

Because of this expense, most cloned animals
are likely to be used as breeding stock with their offspring making it to your
table. Very large agricultural companies or their farmer sub-contractors
usually own these animals. Their
expansive facilities are largely automated and run by technicians rather than
farmers.

Once used breeding stock is past its prime, it
will certainly end up on someone’s plate if there is no law preventing
that. However, the comparative pittance
the animal’s owner will receive for rendering does in no way offset the expense
that will have to be made up from decreased labor costs, usually in the form of
automated expansion. Farmers bemoan
dumping out milk from such animals, but if there is no rule against it, I see
no reason why they wouldn’t feed that milk to other animals, such as pigs or
even sheep.

So, today’s ruling is symbolic only on several
levels. This would affect a fraction of
a percentage of the animals in our industrial food supply network. The farmers employing this method are spending
incredible sums of loan money on these animals while the labs that create them
are loosing millions in speculative money as well. In the face of such vehement opposition from consumer groups
across the board and from their own commodity organizations, there must be a
compelling reason to legalize this practice.

One can only imagine that since there is no
currently economic-related reason to do so now, that those who set agricultural
policy envision a future where cloned animals are the norm, rather than the
exception. Precisely what form that
would take is a matter of speculation, but it certainly is not an
administrative endorsement of current trends towards decentralized production
with a minimum of confinement. It is
possible this is simply a rule change to minimize the paperwork required from
the very few people who own such animals, though the approach would seem
heavy-handed, if true. Since jobs in
biotechnology are considered desirable, this may be an attempt to establish
United States as a leader in what some believe to be the next phase of animal
production.

Perhaps there is something to President Bush’s
otherwise bizarre statements in his 2006 State of the Union speech where he
said he supported a ban on “animal-human hybrids.” Any such transgenic creations would not covered by this
proposal. Either way, it is clear the
move to push this legislation through is not all it appears to be – it
certainly sets the stage for other, perhaps even more controversial
regulations.

Let your opinion be heard before 2 April
2007. Public comment may be sent to FDA via
electronic form. You may also comment via a real, paper letter:

Marie Richie is a writer, scientist and photographer in Portland, Oregon. She may be found online at http://www.sillydogmedia.com/current/ or may be emailed directly: sillydog (at) sillydogmedia.com

Filed under: Health & Science
Share Tweet Pin G Plus Email
previous article: An Introduction to the Fashion of Portland, Oregon
next article: The Aftermath of the Candidate’s Debate