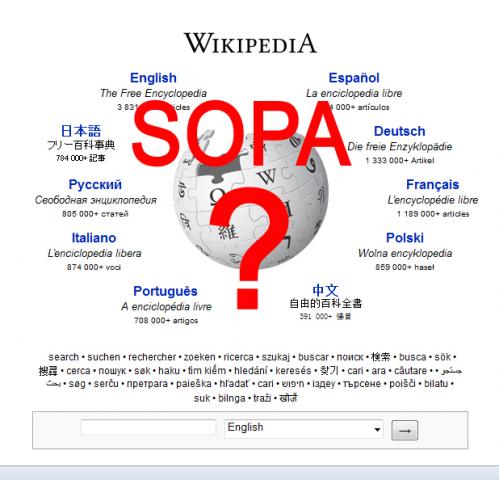 The Wikipedia community has announced its decision to black out the English-language Wikipedia for 24 hours, worldwide, beginning at 05:00 UTC on Wednesday, January 18. The blackout is a protest against proposed legislation in the United States- the Stop Online Piracy Act (SOPA) in the U.S. House of Representatives, and the PROTECTIP Act (PIPA) in the U.S. Senate. The SOPA if passed, would seriously damage the free and open Internet, including Wikipedia and its relevancy regarding free content and its uses.

The Stop Online Piracy Act (SOPA), also known as House Bill 3261 or H.R. 3261, is a bill that was introduced in the United States House of Representatives on October 26, 2011, by House Judiciary Committee Chair Representative Lamar Smith (R-TX) and a bipartisan group of 12 initial co-sponsors. The bill, if made law, would expand the ability of U.S. law enforcement and copyright holders to fight online trafficking in copyrighted intellectual property and counterfeit goods. Now before the House Judiciary Committee, it builds on the similar PRO-IP Act of 2008 and the corresponding Senate bill, the PROTECT IP Act.

According to wiki, “This will be the first time the English Wikipedia has ever staged a public protest of this nature, and it’s a decision that wasn’t lightly made. Here’s how it’s been described by the three Wikipedia administrators who formally facilitated the community’s discussion. It is the opinion of the English Wikipedia community that both of these bills, if passed, would be devastating to the free and open web. Over the course of the past 72 hours, over 1800 Wikipedians have joined together to discuss proposed actions that the community might wish to take against SOPA and PIPA. This is by far the largest level of participation in a community discussion ever seen on Wikipedia, which illustrates the level of concern that Wikipedians feel about this proposed legislation. The overwhelming majority of participants support community action to encourage greater public action in response to these two bills. Of the proposals considered by Wikipedians, those that would result in a “blackout” of the English Wikipedia, in concert with similar blackouts on other websites opposed to SOPA and PIPA, received the strongest support. On careful review of this discussion, the closing administrators note the broad-based support for action from Wikipedians around the world, not just from within the United States. The primary objection to a global blackout came from those who preferred that the blackout be limited to readers from the United States, with the rest of the world seeing a simple banner notice instead. We also noted that roughly 55% of those supporting a blackout preferred that it be a global one, with many pointing to concerns about similar legislation in other nations.”