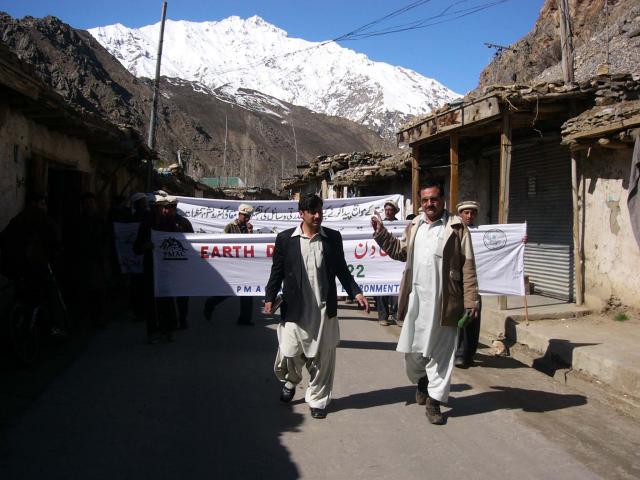 CHITRAL: To aware the general public regarding importance of earth and conservation of natural resources and living on earth Program for Mountain Area Conservation (PMAC) Ministry of Environment  celebrated World Earth Day at Garamchishma in collaboration with Conservation Management Committee (CMC) and village conservation committees (VCC). In this connection a walk comprising over students of different schools was also held carrying banners inscribing (imparting) the message to protect the earth and remaining on earth. Walk passing through different Bazars and ended at G.Chishma. A function was also held in Government Higher Secondary School Garamchishma where Amir Wali Khan President CMC was chief guest on the occasion while the ceremony was presided over by Khuda Panan Principal of this school. Atta Elahi education officer of PMAC briefed the participants while addressing the ceremony. He said that we should to protect the earth and to save it from pollution as the earth is just like our mother. In 70 decade scholars predicted that this earth will not bore burden of increasing number of population and other violation if no balance was maintained. He said celebrating of earth day is just to convey message to masses and people living on the earth  to protect the earth and different type of  life on it. He emphasized on students who are members of nature club to play role in awareness rising and to motivate general public for protection of natural resources for sustainability and durability.

Shahid Hussain conservation officer of PMAC and a student of 9th class also delivered speech on importance of this day. They said that ozone layer also badly affected by environmental pollution which is harmful for human life. They stressed upon members of 8 VCC working in different valleys of Tehsil Lutkoh to convince the public for preserving of natural resources which is important component of life for balance on the earth. They said that we brutality cutting forest and devastating natural resources as well as marine life, wild life, water, forest etc. chief guest Amir Wali and president Khuda Pana also stressed on protection of earth and lives on earth as well as natural resources. They said that we celebrating different world days but we forget it very soon and practically implementation is exercising.   They said that due to our negligence and irresponsible activities natural resources are badly affecting and suffering. They said due to cutting of forest brutality flood damaging earth by erosion on river banks. They said that very rare genius of wild life and birds were disappeared by illegal hunting. They demanded for increasing their network and arranging seminars workshops for awareness raising on importance of protection of earth and lives on the world. A large number of students, teachers social workers and representatives of civil societies attended the function regarding celebrating World Earth Day.