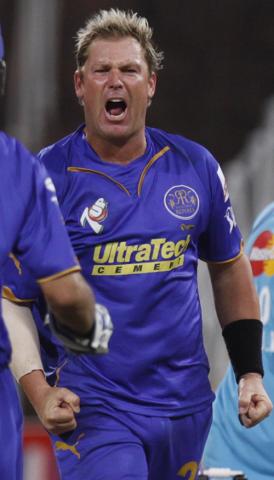 It was the clash of the 2 geniuses of the game yesterday in IPL-2 at Durban. Both leading their respective teams for a very important encounter which would see one of them edge past the other by 2 decisive points in the points tally for the 4th spot. Rajasthan Royals Team led by the master genius leggie Shane Warne batted first and posted a total of 145 runs in their allotted 20 overs.

Now it was the turn of the little master of willow Sachin Tendulkar to weave his batting around the Rajasthan Royals boys, and lead his team Mumbai Indians to victory in this all important match for the 4th position in overall points tally. The Mumbai Indians faltered early, losing 2 quick wickets in succession. But then Sachin walked in and was scoring freely against his old compatriot Shane Warne with relative ease, when the wily Warne struck, trapping the little master leg before wicket at a personal score of 40 runs. The great leggie had foxed the batting maestro, but till then, it seemed that Sachin had succeeded in taking Mumbai Indians to a very important win.

But alas! It was not to be. The Mumbai Indians needed just 4 runs to score off the final over for sealing a win in the encounter. When the tall, lanky fast bowler from ; Munaf Patel walked in to bowl the final over of the match. The excitement in the stadium was palpable. All eyes were glued on the final 6 balls; and Harbhajan Singh was still at the crease. But Munaf bowled the over of his life, conceding just 2 runs in the final over and helping in the fall of 3 wickets in the end to leave Mumbai Indians 2 runs short of the victory target; sealing the most thrilling win of the tournament for Rajasthan Royals.