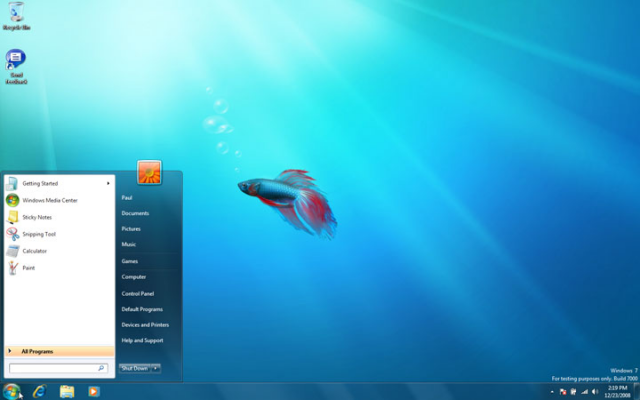 Window 7 interface preview or screeshot. After seeing window 7 , i didn’t find much difference from window vista . But it does show many new features in windows 7. Winodws 7 Is upgrade to vista actually.  Removing all the bugs and error according to me.

Features of  Windows 7 includes a number of new features, such as advances in touch, speech, and handwriting recognition, support for virtual hard disks, improved performance on multi-core processors ,improved boot performance, and kernel improvements , a new version of Windows Media Center ,Gadgets being integrated into Windows Explorer, a Gadget for Windows Media Center, the ability to visually pin and unpin items from the Start Menu and Taskbar, improved media features, the XPS Essentials Pack being integrated, Windows PowerShell Integrated Scripting Environment (ISE), and a redesigned Calculator with multiline capabilities including Programmer and Statistics modes along with unit conversion.

Many new items have been added to the Control Panel including: ClearType Text Tuner, Display Color Calibration Wizard, Gadgets, Recovery, Troubleshooting, Workspaces Center, Location and Other Sensors, Credential Manager, Biometric Devices, System Icons, Action Center, and Display.  Windows Security Center has been renamed the Windows Action Center (Windows Health Center and Windows Solution Center in earlier builds) which encompasses both security and maintenance of the computer.The taskbar has seen the biggest visual changes, where the Quick Launch toolbar has been merged with the task buttons to create an enhanced taskbar

Thus this will much better then window vista …still it is not disclose about it lanching.. but beta testing is avaliable in the market..