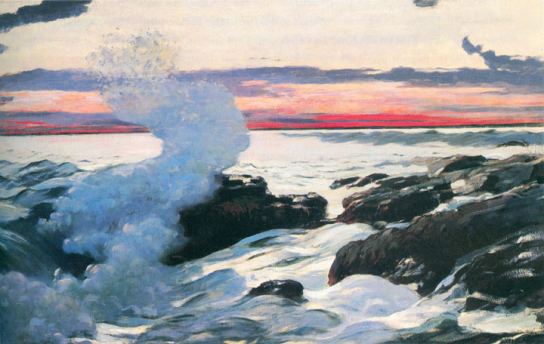 The Clark Institute has a huge collection of Homer’s art. This exhibit focuses on his works on paper, including letters and invoices. Homer began making lithographs for magazines at the age of 19; dozens of his covers are reproduced here. You can see him learning from his apprenticeship — especially composition. Winslow was quite nervous about faces, either obscuring or idealizing them.

America was such a formal nation then — even during the Civil War! The drawings are stiff partly because Americans were stiff. This was a nation of shy men and distant, dignified ladies. (I can’t use another word besides “ladies.”)

Once Winslow was liberated from drawing, color came roaring out of him, in paintings like “Undertow” and “West Point, Prout’s Neck.” His images of the surf are like dinosaurs battling. You can almost hear the sea. Very few paintings convey sound as Homer did.

Winslow Homer was a poet of water. I was hoping “Making Art, Making History” would include more of his Adirondack scenes — but one watercolor shows a stag swimming in a lake, only its head and shoulders protruding (like a sculptural bust). Homer could show that water was immensely deep, just by the sheen on the top. 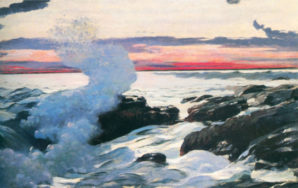