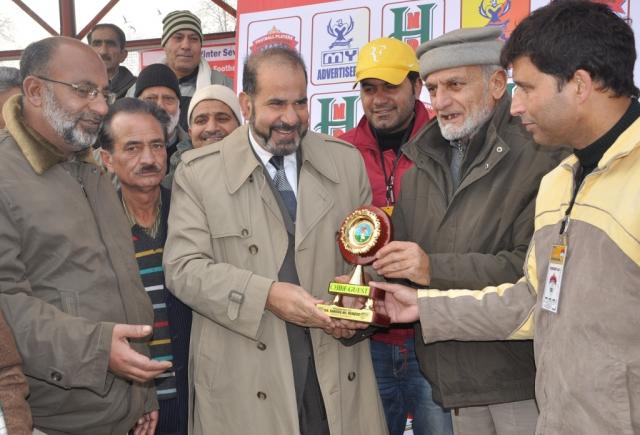 ,December 18 (Scoop News) –The Jammu Kashmir football Association and its wing Football Players Welfare Association today organized a prestigious 8- days winter football tournament at polo ground which is first of its kind during the winter in valley.

The Jammu Kashmir football Association which is headed by  Zubair Ahmad and Football Players Welfare Association headed by  Mehraj-ud-din Wadoo world known football player of the Kashmir valley were complemented on this occasion for organizing such a prestigious tournament.

Khawaja Renzushah, Director Information was the chief guest on this occasion.

While inaugurating the tournament Khawaja Renzushah said that sports is the one of the essential ingredient representing prestige of society. He said football has been adopted in Kashmir for last two centuries and it has given birth to renowned football players. He said it is the fact that players do not have fields available for their football practices. However, today JKFA and FPWA have taken very bold step of launching first ever 8- days long winter football tournament, which will definitely encourage football players to play football in winter as well. He said now with modernization of football infrastructure and development of various sports fields it is possible that the glory of football will be revived.

On this occasion honour of memento was presented to Khawaja Renzushah by FPWA.