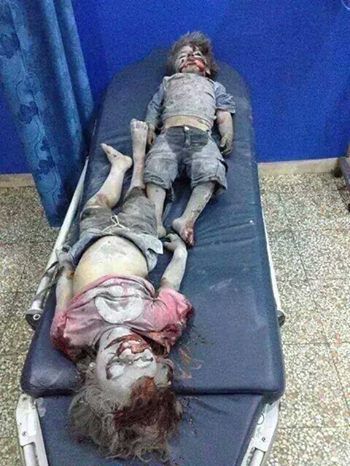 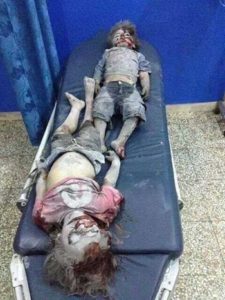 The US-sponsored international coalition against the Islamic State (IS, formerly ISIS/ISIL) in Syria has “killed 865 people since the start of the airstrikes in late September, at least 50 of them civilians”, a new report from the UN chief reveals.

“…the international coalition continued airstrikes against ISIL in Syria on a near-daily basis with reports of some 865 people killed, including 50 civilians, in Aleppo, Deir ez-Zor, Hasakeh, Idlib and Raqqa since strikes began,” the report, accompanying Tuesday’s oral briefing by UN Under-Secretary-General for Humanitarian Affairs and Emergency Relief Coordinator Valerie Amos, said.

Among these are confirmed reports of women and children being killed.

Such people are often called “collateral damage” –  Collateral damage is damage to things that are incidental to the intended target. It is frequently used as a military term where non-combatants are accidentally or unintentionally killed or wounded and/or non-combatant property damaged as result of the attack on legitimate enemy targets.

According to one authority on the subject:

“Under international humanitarian law and the Rome Statute, the death of civilians during an armed conflict, no matter how grave and regrettable, does not in itself constitute a war crime. International humanitarian law and the Rome Statute permit belligerents to carry out proportionate attacks against military objectives, even when it is known that some civilian deaths or injuries will occur. A crime occurs if there is an intentional attack directed against civilians (principle of distinction) (Article 8(2)(b)(i)) or an attack is launched on a military objective in the knowledge that the incidental civilian injuries would be clearly excessive in relation to the anticipated military advantage (principle of proportionality) (Article 8(2)(b)(iv).

Article 8(2)(b)(iv) criminalizes:
Intentionally launching an attack in the knowledge that such attack will cause incidental loss of life or injury to civilians or damage to civilian objects or widespread, long-term and severe damage to the natural environment which would be clearly excessive in relation to the concrete and direct overall military advantage anticipated;
Article 8(2)(b)(iv) draws on the principles in Article 51(5)(b) of the 1977 Additional Protocol I to the 1949 Geneva Conventions, but restricts the criminal prohibition to cases that are “clearly” excessive. The application of Article 8(2)(b)(iv) requires, inter alia, an assessment of:
(a) the anticipated civilian damage or injury;
(b) the anticipated military advantage;
(c) and whether (a) was “clearly excessive” in relation to (b).

The U.S. military states the term is used in regards to unintentional or incidental damage to non-combatant property and non-combatant casualties, however, at least one source claims that the term “collateral damage” originated as a euphemism during the Vietnam War and can refer to friendly fire, or the intentional killing of non-combatants and the destruction of their property.

During World War II, widespread civilian casualties and damage to civilian property were caused by strategic bombing of enemy cities. If the intent of the strategic bombing was to destroy the enemy’s war industry, then civilian casualties were called collateral damage. Given the low accuracy of bombing technology in WWII, it was inevitable that civilian casualties would occur. However, bombardments such as the Japanese bombing of Chongqing and the indiscriminate attacks by the Germans on Allied cities with V-weapons fall outside the definition of collateral damage as these raids were meant to terrorize and kill enemy civilians.

Also during the 1991 Gulf War, Coalition forces used the phrase ‘collateral damage’ to describe the killing of civilians in attacks on legitimate military targets.

A legitimate military target is strictly defined Article 2 of the 1907 Hague Convention:

Article 2 of the 1907 Hague Convention IX – Bombardment by Naval Forces in Time of War allows the bombardment of “[m]ilitary works, military or naval establishments, depots of arms or war matériel, workshops or plant which could be utilized for the needs of the hostile fleet or army, and the ships of war in the harbour”. This was supplemented by the 1977 Protocol I amendment to the 1949 Geneva Conventions, which provides for the general protection of civilian objects and restricting attacks on military objectives. Article 52 of Protocol I states that: “In so far as objects are concerned, military objectives are limited to those objects which by their nature, location, purpose or use make an effective contribution to military action and whose total or partial destruction, capture or neutralization, in the circumstances ruling at the time, offers a definite military advantage.”[1]

Any attack must be justified by military necessity: An attack or action must be intended to help in the military defeat of the enemy; it must be an attack on a military objective,[2] and the harm caused to civilians or civilian property must be proportional and not excessive in relation to the concrete and direct military advantage anticipated.

Filed under: News, World
Share Tweet Pin G Plus Email
previous article: San Diego Bay Wine & Food Festival Grander Than Ever
next article: “Chuck Hagel and I had our differences over many years” said McCain