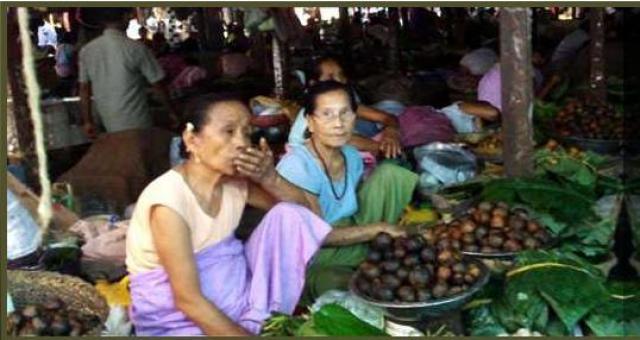 Manipur, India has the world’s only all women market. Unfortunately, the tribal women entrepreneurs of the state do not have access to the market. Achungmei Kamei, a tribal woman and a community reporter, is speaking out for these women.

Achungmei Kamei lives in Imphal – a town in the North East India that has India’s only market which is entirely run and controlled by women. The market began in pre-independence era, during the British rule, as an effort by local hill women to become financially independent.  Today, over 3,000 women entrepreneurs earn a livelihood here. Enter the market and you will see women dressed in their traditional attire sitting in rows, selling a variety of goods and commodities that include food products, clothes and furniture

Achungmei, who has to support and earn for 2 siblings and elderly parents, has always has drawn inspiration from women who are economically self-sustained and play leadership role in their families/neighborhood. Naturally, she finds the women entrepreneurs of the all women’s market very inspiring. However, there is one issue that she also feels frustrated about:  Women from her own tribal community still do not have access to this market.

What keeps the tribal women out of the women’s market? Some say this is because they are the minority communities who always are discriminated against. Some say this is because the tribal communities settled in the state later and must wait their turn before finding an equal footing in the society. But the most logical reason seems to be this: Most tribal women live in the villages outside the town. So, when allocation of shop spaces begins, non tribal women living within the city limits are quicker to apply and get a booking done.

Currently, the market runs from a bamboo structure. But this week the government has opened 2 new buildings where the women will shift their stalls. Sonia Gandhi, the leader of India’s ruling party, inaugurated these buildings. During her visit Gandhi received several tribal women who pleaded with her to allow them access to the market. These women are organic farmers who have been selling their products to wholesale retailers until now. But Achungmei says that if they are given access to the women’s market, they can earn more through direct marketing. According to her, the market draws thousands of buyers every week and for women of her community it will be an excellent opportunity to boost their earnings, as well as hone their entrepreneurial skills there.

The all women’s market also has a reputation of being a great hub of women empowerment. Achungmei says, “In this market, women not just sell and bargain commodities, but also debate political issues, organize meetings and demonstrations. In 1992, women entrepreneurs here fought a big eviction effort by the government which resulted in a women’s movement. For the entire region, this has been the strongest women’s movement ever.  Many women in my community are the sole bread earners in the family. Yet they do not have the freedom to decide for themselves. Being a part of the women’s market entrepreneurs’ group can help them be aware of many issues and be strong.”

Strong logic and high hopes. Will the hope actually translate into a change? Achungmei believes, it will because, certain social changes are inevitable. And when women demand a change, they do not stop until it has actually happened. There is no reason why the women’s market will have a different end.