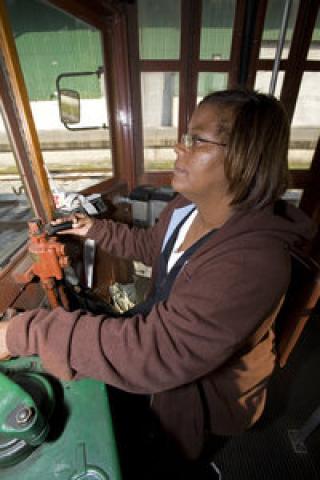 This is a cross-post by Ellen Bravo, former director of 9to5, National Association of Working Women and author of Taking on the Big Boys: Or Why Feminism Is Good for Families, Business and the Nation.

Congratulations, working women! As of today, your salary since January 1, 2007, has finally reached the total earned by your male colleagues in 2007 alone. What’s more, this pay gap is all your fault!

According to the media, the problem is that women just don’t ask. If we learned to speak up in salary negotiations, pay equity would be a hard fact.

An ABC News segment called the negotiation process “something that each of us has the ability to control….No employer has an obligation to whisper in the woman’s ear, ‘Hey, you know, you just lost out on more money because you didn’t speak up.’”

Stories like these leave out a few important realities: The majority of women work in jobs where they have no right whatsoever to negotiate for pay. Many are like Donna, a software developer whose employment agreement lists “discussing salary with colleagues” among “fire-able offenses.” Hard to know you’re making less than others if you’re not allowed to know what the others earn.

Yes, women need to learn negotiation (and the facts about labor law, which already prohibit salary secrecy, according to the National Labor Relations Board). But blaming the wage gap on women’s lack of assertiveness is like blaming sexual harassment on women’s lack of snappy comebacks. The real problem isn’t that women don’t ask for more—it’s that employers pay women so much less than they deserve.

Why do employers do this? Because they can, and often because they think they have to in order to compete.

A key problem is that society undervalues the work women do. Many jobs that are now female-dominated, such as clerical work, once excluded females. When men were in short supply during the Civil War, women were hired at one-half to two-thirds the wages of men. Women performed well, employers hired more and more of them—and that discriminatory wage eventually became the market rate. Similarly, the lack of regard for women’s work as caregivers in the home set low values for similar work in the marketplace. That’s why those who care for our young children earn less than those who care for our cars, our pets, our lawns.

Lack of collective bargaining rights also undermines women’s wages. The Big Boys—those who control wealth and power in this country—like to say pay corresponds to risk. Yet The Washington Post found that one of the poorest paid occupations, nurse’s aide, faces a risk of serious injury higher than that of a coal miner or steel worker.

Power, not risk, is what determines pay rates.

Another reason for women’s low pay is the motherhood penalty. Studies agree that women with children are paid less across the board than women without kids or men of any family situation. The research varies only on how great that penalty is.

Women’s pay is also hurt by inflation pushing down the value of the minimum wage, since women are disproportionately clustered in minimum wage jobs, and by the lack of laws requiring equal treatment for part-time and temporary workers.

What about professional women? Studies show that they are less likely than men to initiate salary negotiations—and also that they’re viewed as pushy when they do. More important, they’re less like to get leads, training, mentoring, opportunities, promotions, and other rewards that result in higher pay.

The wage gap between men and women has been stuck at 77 cents on the dollar—72 cents for African American women, 60 cents for Latinas. The Big Boys like to remind women that the gap has narrowed. They forget to mention that half the narrowing comes from a loss of pay for men, especially men of color—not what we had in mind by equality. The gap is greatest for women with the most education and longest hours. And the mommy wage gap—the difference in pay between women with kids and everyone else—has in fact increased.

We need to change how pay is determined—not according to what you earned on your last job or how slick you are at promoting yourself, but rather on fair, objective, transparent criteria.

A number of public policies will help, starting with the Fair Pay Restoration Act. This bill would reverse the U.S. Supreme Court ruling in Ledbetter v. Goodyear: that discrimination claims must be made within 180 days after the pay is set, rather than any time a person discovers they are being paid at a discriminatory rate.

Another bill titled the Fair Pay Act would require employers to use objective job evaluations to achieve equal pay for equivalent work and remove gender, race or national origin as criteria in compensation. The Employee Free Choice Act would ease the negotiating that matters most, collective bargaining, by removing barriers to union representation. To end the motherhood penalty, we need to ensure that family responsibility is added to the list of categories protected under anti-discrimination law. And we need to raise the wage floor and guarantee equity for those in non-standard jobs.

And yes, do learn the art of negotiation. Groups like WAGE (Women Are Getting Even) offer terrific workshops and information on the Web about how to do this.

But above all, learn the necessity of organizing. The best way to get what you need for yourself is to work with others on behalf of everyone for changes in workplace and public policy.

Filed under: Politics, US
Share Tweet Pin G Plus Email
previous article: Oil Prices Likely to Continue Soaring to New Highs for the Time Being
next article: Women at Greater Risk in Today’s Bad Economy