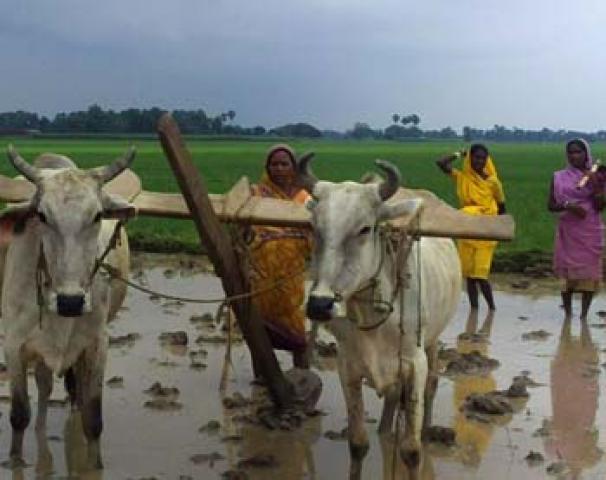 A group of women have broken into what has been a male bastion for centuries: Farming.  An IndiaUnheard community reporter Varsha tells us how women are turning food growers in a remote village of India’s Bihar state

Varsha brings us the inspiring report of a group of women in her district Patna who have mastered the art of traditional farming including tilling the land with bullocks. The women have also formed a group and are collectively doing everything that was until now done only by men in their community: Ploughing, transplanting, weeding, irrigating, applying manure and harvesting. In short, these women have become a group of master farmers.

In Indian traditionally women have been mentioned as the provider or food. Hindu scriptures have described goddess Luxmi as ‘Annadatri’ – which in Sanskrit means ‘Food Giver”.  But socially, women’s role has mostly perceived as the one who serves, rather than one who grows the food. The business of growing food has been recognized as a male domain for centuries.

Ironically, for decades, women have been laboring hard in farming sector, especially in rural India.  In fact it is estimated that farming in almost half of the land in India has more contribution of women than men, which amounts to 66% of the total farm labour. This is because men are busy working elsewhere – construction sites, factories etc. But the shift in cultural attitudes towards women is yet to happen.

A big reason for this is, in the patriarchal society of India, it’s men who has the ownership of the land. In Bihar, for example,  only 1% of women in Bihar – one of the most underdeveloped states of India – are owners of land. Though the state has a long going land rights movement, it has been focused on land for the landless, regardless of gender. Single ownership in the woman’s name – or joint ownership in both names — is still largely an untouched topic, despite central and state government laws which allow equality of ownership.

However, the collective farming efforts by village women of Bihar now is ought to bring the focus back to the need of a gender dimension to land rights movement.

It has been seen that wherever land is owned and managed by women, there are signs that they use it as collateral to borrow money to start up micro-businesses which generate a steady income. The women also grow in confidence and demand services from the government for themselves and their children.

If the women of village have access to land, they can provide food for the family instead of needing money to buy it. This is what is happening in Bara village of Bihar today. With enough food coming in, the women of the village can soon have time to look for other ways of earning money, by making and selling handicrafts, for example. This means they are able to buy clothes, school books or medicine.

Varsha says that here may be a long way to go until women in her community get equal rights to own land, but through this farming effort, the women of Bara village have taken a bold step towards that.

They indeed have and there single step is bound to turn into a journey for miles.