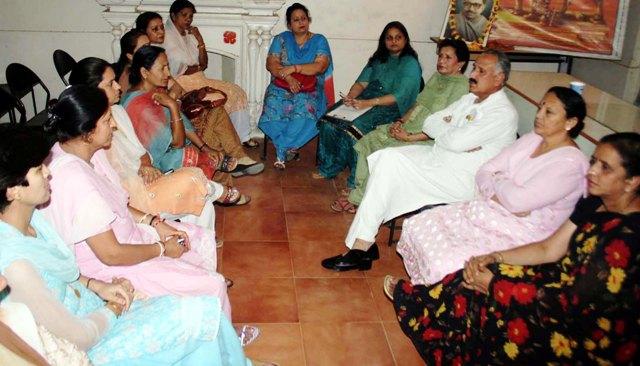 Jammu,May 1 (Scoop News) –  J&K Mahila Morcha(Women Front) State President Sakina Bano, on Saturday  said that the women-folk across the country should be grateful to the BJP for its continous and firm stand on grant of reservation to the women in Parliament and Assemblies. She said that a woman can well understand the problems being faced by them and it is therefore all the more important that they are given due representation in the law making bodies. Such a step will enable them to plead the concerns of the women in a more effective way, she added. She also briefed the meeting of the Morcha’s proposed programmes to be undertaken in the coming days.

Earlier BJP State President Shamsher Singh Manhas, while addressing a meeting of the newly constituted State team of Mahila Morcha said that the party is committed for women empowerment. He said the women constitute about 50 per cent of the population and play a very important role through various stages of their life. In these days of advance education, it is witnessed that the women have registered their presence in almost all the fields and even in many cases achieved very high and respectable positions at national and international levels.

Manhas said that there has been a number of schemes launched by the State as well as the Central government for the welfare and upliftment of the women but unfortunately the benefits of such schemes have not reached the deserving women in absence of proper awareness. He asked the Mahila Morcha leaders present in the meeting to gather details of these schemes from the concerned departments and help the poor and needy women of their respective areas in getting them the benefits of these schemes. He also stressed on providing equal opportunities to the female children in the families so that they are in a position to prove their ability and competence in their lives.