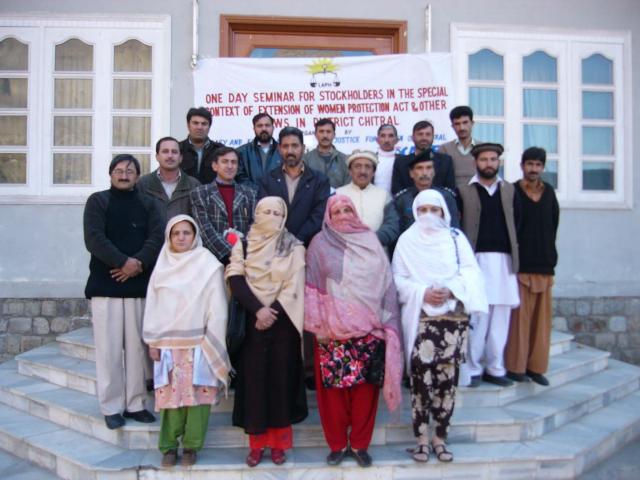 CHITRAL: Stakeholders in a seminar in the special context of Extension of Women Protection Act & other laws in Chitral urged for implementation and extension of Women Protection Act at Chitral. The seminar was organized by Easy & Equitable access to Justice program for women of Chitral funded by Trocaire a project of Legal Awareness Program for Human Rights (LAPH). Niaz Ali Shah Chairman board of Director briefed the participants regarding aim, objectives and achievement of LAPH. He said that LAPH has organized so many seminar and workshop on awareness among the masses regarding women rights. As well as they compensate widow women in rehabilitation and supporting deserving students by stipend scholarships to decrease dropt out ratio in Chitral. Niaz A Niazi Advocate explained Women Protection Act and offered for open debate on this issue. The stakeholders proposed to raise this issue through women councilors at Zilla Council of Chitral and through elected representatives. They also proposed to wait for imposing Shria Regulation in Malakand Division as its summary already been moved by Governor NWFP. Prominent among the stakeholders were District Nazim Chitral Haji Maghfirat Shah, Tehsil Nazim Chitral Sartaj Ahmad Khan, District Public Prosecutor Azmat Esa, Regional Program Manager AKRSP Eng. Sardar Ayub, Prosecutor Inspector Sher Ahmad, lawyers, representatives of civil Society, elected Nazimeen president of Chitral Press Club and other people belonging to all walks of life. The stakeholders unanimously through a resolution demanded from the President of Pakistan for extension of Women Protection Act at Chitral to protect and support women of Chitral who are being harassing in some pity cases.

In reaction of encroachment removing operation by district administration of Chitral hundred of students of Chitral schools leading by some teachers attacked at Chitral Bar room and ransacked all furniture, computer, windows, doors and goods inside the Bar president Chitral District Bar Association Khurshid Hussain Mughul told this scribe. They were hundred of anger students who attacked at bar room early in the morning and besieged lawyers they ransacked all goods inside the 3 rooms of bar room president Bar association added. He said that students tried to spray kerosene oil and put in fire the bar room but police stopped them timely. This was reaction of yesterday encroachment removing drive by district administration where some shops and cabins were demolished by district admin, which were standing in property of school territory. Teachers of Government Centennial Model High School were getting the rent of these shops Mr. Mughul alleged. He said that earlier that before launching this drive Chitral Bar Association has determined to not trail any case against of these encroachments as a result these people reacted harshly and attacked at Bar room.  In case of demolishing of these shops and cabins the teachers were deprived from extra income as a result they provoked students to attack at Bar room and destroyed goods inside. As they considering that district admin were motivated by Bar association for this drive. While on the other hand Principal and Chitral Teachers association said that the amount collecting in head of rent of these shops and cabins were depositing in Parents Teachers Counsel (PTC) to generate extra fund for school maintenance.

Chitral police lodged FIR No. 736 on 4th December under section 14 ISL (Islamic Law), and 436, 440, 452, 147, 149, 427, and 511 of CRPC. While a senior officer of District Admin said that invitations has been started in this regard and those who found involved in this case would be arrested. President of District Bar Association Khurshid Hussain Advocate demanded for early action against the accused persons, renovation of Bar room. He also alleged that some teachers members of school construction committee raising Talibiztion here in Chitral by this ways. He termed allegedly involvement of School principal and alleged that these activities were done on his gesture. Meanwhile DCO Chitral visited Govt. Centennial Model High School where he met teacher association to discussed the matter and solved it amicably.