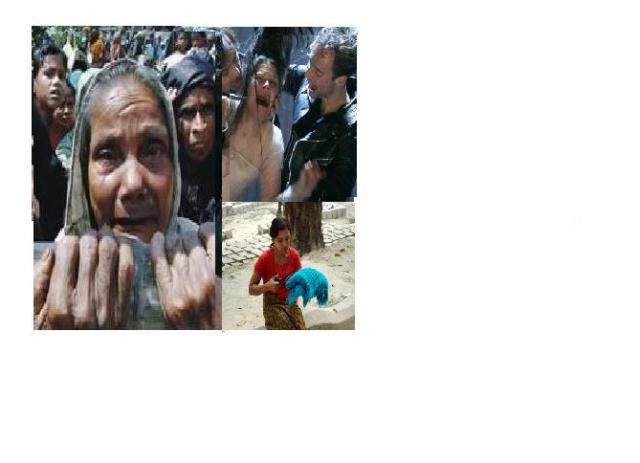 Women are the majority part of the total population. But they are being suffered by many ways in whole world especially in the third world countries like . We are telling about the rights of information. But first we have to think about the rights of the huge number of women who are making a great contribution for the society to make it civilized.

Women’s right refers to the freedoms inherently possessed by women and girls of all ages, which may be institutionalized, ignored or suppressed by law, custom, and behavior in a particular society. These liberties are grouped together and differentiated from broader notions of human rights because they often differ from the freedoms inherently possessed by or recognized for men and boys and because activism surrounding this issue claims an inherent historical and traditional bias against the exercise of rights by women.

Issues commonly associated with notions of women’s rights include, though are not limited to, the right: to bodily integrity and autonomy; to vote (universal suffrage); to hold public office; to work; to fair wages or equal pay; to own property; to education; to serve in the military; to enter into legal contracts; and to have marital, parental and religious rights. Women and their supporters have campaigned and in some places continue to campaign for the same rights as modern men.

In 1946 the United Nations established a Commission on the Status of Women. Originally as the Section on the Status of Women, Human Rights Division, Department of Social Affairs, and now part of the Economic and Social Council (ECOSOC). In 1948 the UN issued its Universal Declaration of Human Rights which protects "the equal rights of men and women", and addressed both the equality and equity issues.

Since 1975 the UN has held a series of world conferences on women’s issues, starting with the World Conference of the International Women’s Year in . These conferences created an international forum for women’s rights, but also illustrated divisions between women of different cultures and the difficulties of attempting to apply principles universally Emerging from the 1985 Nairobi conference was a realization that feminism is not monolithic but "constitutes the political expression of the concerns and interests of women from different regions, classes, nationalities, and ethnic backgrounds. There is and must be a diversity of feminisms, responsive to the different needs and concerns of women, and defined by them for themselves. This diversity builds on a common opposition to gender oppression and hierarchy which, however, is only the first step in articulating and acting upon a political agenda. At the Fourth World Conference on Women in , The Platform for Action was signed. This included a commitment to achieve "gender equality and the empowerment of women.

The condition of about women’s rights is very devastating in maximum cases. They are just counted as women rather than as Human being. They are being used for the happiness of the men. Things are like that they are producer and the men are the consumer. If a girl is beautiful by her external looking then she gets offer by a lot of people and her family decides who is going to get her. Even there is still a lot of child marriage happening in . In spite of a law about child marriage from the government people don’t bother anything about the child marriage.

Child marriage is a violation of human rights whether it happens to a girl or a boy, but it represents perhaps the most prevalent form of sexual abuse and exploitation of girls. The harmful consequences include separation from family and friends, lack of freedom to interact with peers and participate in community activities, and decreased opportunities for education. Child marriage can also result in bonded labor or enslavement, commercial sexual exploitation and violence against the victims. Because they cannot abstain from sex or insist on condom use, child brides are often exposed to such serious health risks as premature pregnancy, sexually transmitted infections and, increasingly, HIV/AIDS. Parents may consent to child marriages out of economic necessity. Marriage may be seen as a way to provide male guardianship for their daughters, protect them from sexual assault, avoid pregnancy outside marriage, extend their childbearing years or ensure obedience to the husband’s household. In .

It is really a devastating scenario that most of the Bangladeshi girls are not informed about their marriages. When there is no guarantee of knowing about the marital matters from their family who are their most intimate persons. Then how can we expect their right to information from their husbands’ family and how can we expect it from other persons in the society. This is a big question for all human beings. But there is no legal answer from those people who are responsible for these unethical events.

In Islam, there is some law about the marital facts. First, both of the persons should have their own desire for their marriage and the guardians will arrange all the procedures. After marriage, a woman will get the portion of her father’s asset. These two things are the right for a woman according to the Islam. But none of them are obeyed by the bulk of the people.

When a girl becomes 15/16 age the guardians start to think their daughter as a burden. They start looking bridegroom for them. They just choose as their wish and force their daughter to marry that specific person.

After the marriage, they get little chance to open their mouth and give any decision in family matters. Is not it violence to the way of freedom of information? They are often emotionally black milled by their family members like father, mother, brother and husband. But they don’t find themselves to do the same thing. Suppose, at the time of marriage the parents choose the groom for their daughter. If the girl says no to their parents then they starts to stop her education her companions with others and even they make her solo in a room by shutting down the doors and windows. My question is, what sort of civilization it is?

Somewhere the parents ask the opinion of their daughter after arranging everything for the marriage. They think they are rightly doing those. If the girl betrays then they family say that my daughter has grabbed my entire honor in the society. But they don’t bother about the psychology of their daughter. Does she love someone else or is she thinking it in other way?

I have seen a lot of guardian’s reaction about this question. They said, “Oh! She is not matured enough to know what is good and what is bad.”

My question is, “The girl who does not know how to take decision for her own, then how could she be able to maintain a family of a totally new person or persons?”

As a result of this domination on women they face a lot of problem in their post marriage life. First, they don’t get enough courage to say anything in decision making. Second, they don’t get enough support from their husband to say something. Third, the parents in law get the chance to dominate her. Finally, she faces some serious consequences like dowry, beating, suicides and divorce etc.

My question, “Who is mainly responsible for this penalty of a beautiful life?

What will be the answer and who will give that answer as it has been a tradition in our society.

Have you ever asked yourself this question?