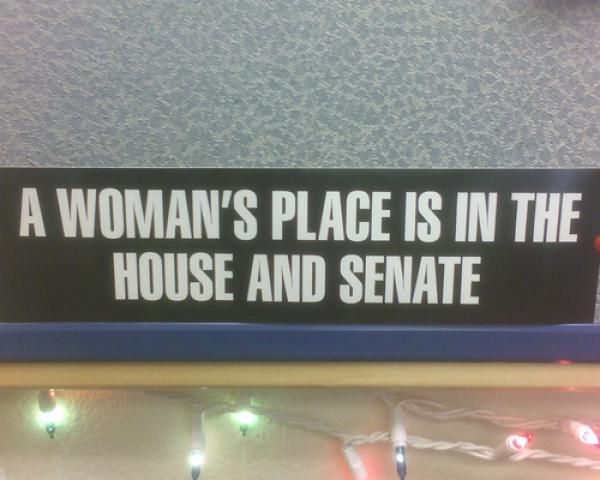 Women’s reservation bill providing 33 % quota for women is a long pending issue in India, time and again surging ahead, but being allowed to get weakened gradually as if it is a low depression and allowed to cross over peacefully without any effect in each session of parliament.

Recently, BJP through its women’s wing, prior to the commencement of the recent parliament session, held a rally and meeting, highlighting the issue of women’s reservation bill and also called upon the government to table the women’s reservation bill during the session of the parliament. But, during the recent session of parliament, since the burning issues like inflation, price rise etc took precedence,other issues were relegated to insignificance.

But women groups have alleged,‘betrayal’ by the UPA government with regard to the passing of the 33 % Women’s Reservation Bill. According to them, the UPA government’s approach towards the Women’s Reservation Bill by ‘consensus’ is nothing but a ‘conspiracy’.The Women’s group have also written a letter to Prime Minister Manmohan Singh, emphasizing the fact that the requisite majority to pass the Bill in Parliament is very much there.

The Women’s group staged a dharna outside parliament and also sent a memorandum to the Prime Minister demanding that the 33 % Women’s Reservation Bill should be tabled  and voted upon in this half of the Budget Session. Since the Women form 50 % of the electorate in India,this election year is an opportunity for the UPA government to ensure the passage of the bill.The women’s group also argued that they were only seeking the follow up of  73 rd and 74 th constitutional amendment and wanted to have a logical conclusion for them.By ensuring 33 % reservation for women in Parliament and assemblies it can be achieved.The UPA is failing in its committment of common minimum programme.as far as women’s reservation is concerned.

They also added that India stands the lowest among its neighbouring countries as far as reservation for women is concerned.India after the 13 th Lok Sabha election stands at 8.2 %, Pakistan over 21 %, Nepal is 30 % and Bangladesh is 10 %..Women are angry, tired and feel insulted by unmeant and unkept promises by manifestoes and speeches of the seniormost  leadership that too in wake of the election year, said Veena Nayar, director of Women’s Political Watch.

While the field survey shows that common man is supporting women’s reservation but it is only the men-in-power are opposing, denying and occupying the women’s rightful place, but unhesitatingly supporting their wives, daughters and sisters.

Alliance consisting of 30 women’s groups and other support groups at the grass root level also said that the countries even with the dictatorship have the political will to implement women’s reservation in their parliament and assemblies.

What the women’s group have said is true, based on facts and statistics and they cannot be overlooked viewed from any angle.