Barack Obama is preparing to allow up to 5 million immigrants to work. If passed, this plan will certainly be a new confrontation between Barack Obama and congressional Republicans. According to an article in the New York Times, Thursday, November 13, the President plans to give work opportunities for up to five million illegal aliens within this new decree.

The proposed measures aim to provide a solution for the millions of undocumented people living in the United States. The majority of Mexicans could use the programs created in 2012 for illegal children who were brought in the United States by their parents. According to US officials, quoted anonymously by the New York Times, parents of children with US citizenship or permanent residency (green card) may be offered work for a specified term with papers allowing them to work legally and be protected from deportation.

The number of people involved will depend on whichever criteria are selected by the president, including the number of residency years one has in the United States. In total, about 11.7 million undocumented people live in the United States, according to the Migration Policy Institute, a population of about 319 million, which could critically complicate the process of gathering accurate information to fit the criteria.

Obama will return to Washington on Saturday at an Asian tour, and no official announcement should take place before his return. “The president is close to a final decision,” said his spokesman, Josh Earnest on Thursday, believing that the President will finalize his recommendations fairly quickly, but certainly not before the end of his journey.

Other measures in the plan, which includes ten points, according to Fox News, concern including security at the border with Mexico, the remuneration of police officers who are assigned and visas for highly skilled foreigners. 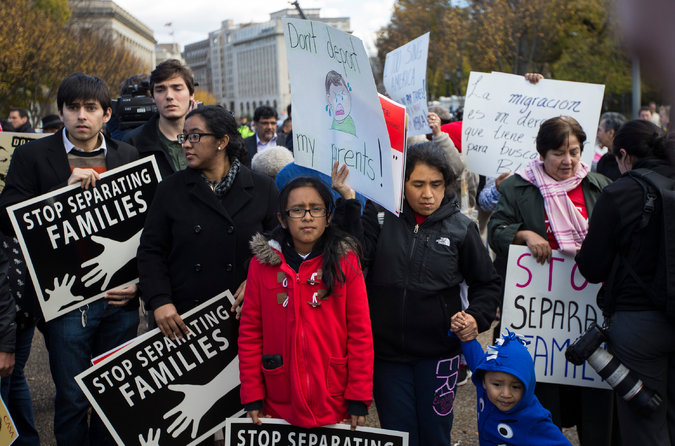 However one sees legislation, within presidential decrees, there should always be included as little as chaos in Congress as possible, and avoid being qualified as amnesty by Republicans. Opponents of the president believe that only Congress has the power to act to regularize illegal aliens, but Barack Obama has said that his patience was exhausted face blocking any reform in Congress.

An ambitious project was adopted in 2013 by the Senate, dominated by Democrats, but under pressure from the conservative wing of the Republican Party, the leaders of the House primarily avoided the issue. Despite the public outcry and protests from the supporters of the Republicans, Obama will not pay them any head and, “announce as soon as next week a broad overhaul of the nation’s immigration enforcement system that will protect up to five million unauthorized immigrants from the threat of deportation and provide many of them with work permits, according to administration officials who have direct knowledge of the plan.”

“His actions will trigger a new wave of illegal immigration,” warned Republican Senator Jeff Sessions, Tuesday. With other Conservative colleagues, he announced that he would try to use the vote next for finance laws in an attempt to gain leverage to cut funding responsible for implementing these adjustments for the federal government. The difference is for convicted criminals; the sentences will remain the same and they will not be saved from deportation in the event that there are warrants for their arrest and no job will likely be offered at that point from anybody.