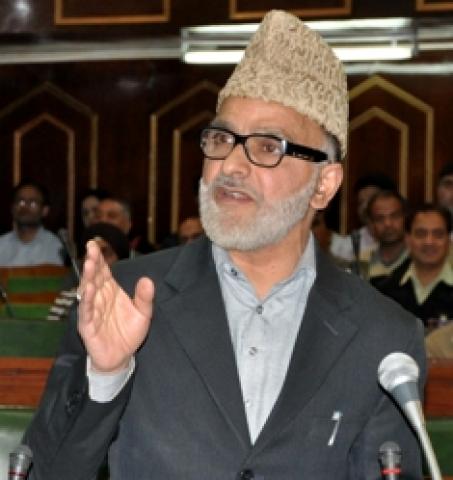 Jammu,March 30 (Scoop News) –   Minister for Rural Development and Parliamentary Affairs  Ali Mohammad Sagar on behalf of Minister Incharge Home, today informed the Legislative Assembly that the vehicular traffic in the state has increased manifold over the past some years, the road infrastructure has not witnessed matching increase. Therefore the rising number of vehicles has led to congestion of roads in general and on intersections in particular as a result of which traffic jamming has increased substantially.

Replying to a Calling Attention Notice of  A. R. Veeri, the Minister said that Panthchowk is one of the most important road junctions in valley. Sonwar-Panthachowk road passes through the cantonment area as a result of which a large number of Non-Civilian Authority (NCA) vehicles ply on this vital artery on a daily basis which puts tremendous pressure on this stretch of road. Similarly, a large number of buildings have come up near Panthachowk as well as all along the route upto Sonwar which too generate lot of traffic and in the absence of adequate and proper parking arrangements, the same spills onto the road, thereby complicating the situation even more. The which is situated on this stretch of road is frequented by a large number of visitors, patients, attendants as well as by the Doctors, paramedics and staff posted there. The parking arrangements in the hospital are very meager and do not suffice the requirement and thus lead to even more traffic congestion, the Minister maintained.

He said traffic jamming takes place mostly in the sector between Panthachowk Bye-pass junction upto Zewan junction having a length of 0.75 kms. The widening of this road sector is required for decongestion of traffic. The widening of the road is being taken up by National Highway Authority of India, as the road is under their jurisdiction. The tentative cost for widening road to 04 lane status works out to Rs. 23.27 crores involving acquisition of land/structures/shops and development cost.

He said in order to effectively regulate the traffic adequate traffic deployment has been made on this stretch of road under the supervision of the Deputy Superintendent of Police.

The Minister further said that as a long term measure, to decongest the traffic plying on this road stretch, 04 lanning of 1-A (Now NH-44) from Qazigund to has been approved by Government of India with proposed ROW of 60 Mtrs. The work on the scheme has been taken in hand by National Highway Authority of India. The new proposed alignment of 1-A with the proposed ROW of 60 Mtrs is likely to get merged in the vicinity of Hotel Silver Star on Bye-pass thereby detouring Panthachowk. All the major towns including Panthachowk shall be bye passed.