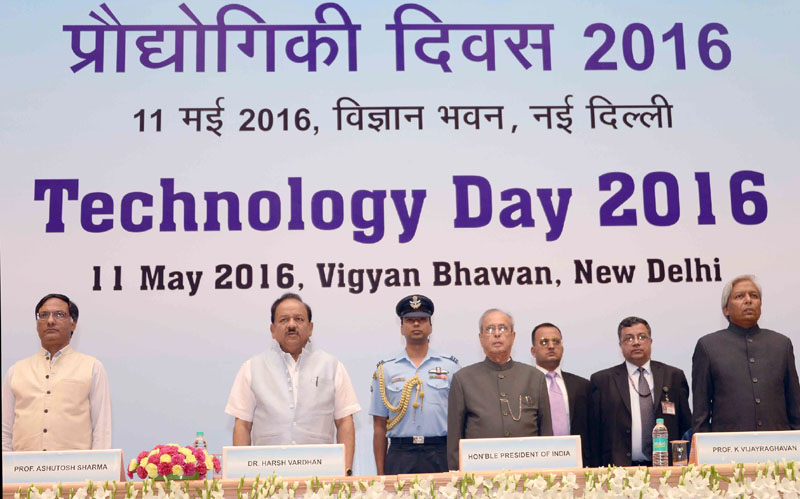 Speaking on the occasion, the President said it is the untiring efforts and missionary zeal of dedicated scientists and technologists of our nation that has paved the way for India’s emergence as a technology power. We are now working towards a technological revolution aimed at empowering millions of our countrymen. The National Technology Day is symbolic of our quest for scientific inquiry and technological excellence, and a translation of that quest into an integrated scientific, societal and industrial approach. It marks not only our technological innovations but their successful commercialization making the fruits of painstaking research available to the people at large.

The President said India is gradually inching towards becoming one of the leading countries in the field of scientific research. It is enviably placed amongst the top five nations in the field of space exploration. ISRO’s Polar Satellite Launch Vehicle, in its thirty-fifth flight recently, successfully launched a 1,425 kg satellite into the orbit. This was the seventh and the final satellite in the Indian Regional Navigation Satellite System enabling us to enter an exclusive club of nations.

He congratulated the entire community of Indian space scientists for this unique “Made in India” accomplishment. He emphasized that we must not rest on our laurels as this achievement should propel us to further up-grade our existing technologies. With rapid changes occurring in science education and research, only those countries having a technological edge will emerge successful in the fiercely competitive global market.

The President said innovation is the antidote to stagnation. The youth of our country are brimming with ideas and enterprise. They are harnessing technology to find solutions to day-to-day problems of the common man. Ingenuity aided by technology can bring substantial welfare benefits. With an estimated 4,300 start-ups, India is the third largest start-up eco-system in the world today. A central feature in this ‘start-up movement’ is the greater involvement of our youth. In fact, 72 per cent of the start-up founders in India are below the age of thirty five years.

The combined might of this talented breed of new-age entrepreneurs is there to be tapped. India must have a strategy to unleash the potential of the youth to provide meaningful opportunities for their participation in the start-up system. This will help us reap the benefits of a favourable demographic transition currently underway. It will also help provide direct and effective intervention to uplift the quality of life among millions of marginalised citizens.

The President said a bright scenario is emerging for the Indian start-up eco-system with the presence of favourable factors like availability of funding, platform for consolidation, suitable technology and a burgeoning domestic market. The possibility of 11,000 start-ups by 2020 is real. Start-Up India and Stand-Up India schemes have the potential to trigger another round of socio-economic transformation similar to the initiatives of last decade when rights to job, education and food were provided, backed by legal guarantees.

However for such an eco-system to thrive, government efforts are not enough. It requires the contribution and eager participation of stakeholders at various levels. He urged all present to take a pledge to make sustained efforts in this direction on National Technology Day.

The President added that by placing a premium on novelty and creative thought, we can spur common citizens to find innovative answers to important socio-economic challenges of our times. He appealed to all countrymen to rise to the occasion and make innovation a way of life.