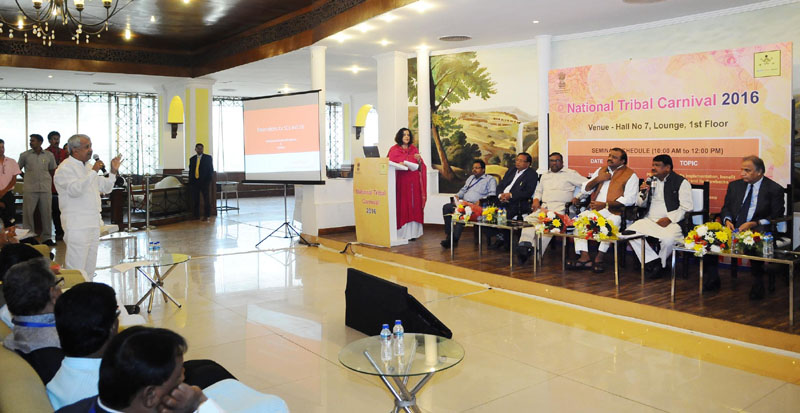 The Union Minister for Tribal Affairs, Mr. Jual Oram chairing a Workshop on Reservation in politics, education and service matters, in New Delhi on October 28, 2016.

Reservation Policy For Scheduled Tribes And The Need For Empowerment Emphasized

New Delhi (PIB-GR-TYP-BIN): A Workshop on “Reservation in Politics, Education and Services” was held as part of National Tribal Carnival 2016 in New Delhi on Oct 28.

A contextual presentation was made by JS, Department of Personnel and Training delineating the critical aspects and key features of reservation policy in recruitments and promotions. The presentations by JS, Ministry of Tribal Affairs and JS, Ministry of Skill Development dwelt on reservations in Legislature, PRIs, role of other Ministries/Departments on reservation aspects, skill and entrepreneurial development initiatives with particular reference to the tribal communities and a holistic view of Government initiatives in this regard were highlighted.

Mr. Bhabhor spoke on upliftment of tribal communities for their holistic growth and development and their initiation to the mainstream population. He reiterated Government’s commitment for holistic development of tribal communities. He also appreciated the extensive presentations by the panelists and complimented efforts in organizing three workshops as an important aspect of the National Tribal Carnival. Mr. Faggan Singh Kulaste shared his thoughts on the reservation policy.

Mr. Oram, while summing up, thanked various stakeholders and complimented the contributions by the panelists. The backdrop of reservation policy for Scheduled Tribes and the need for their empowerment was emphasized.

The contents of various issues were widely appreciated by audience and there were a number of interventions which were responded to by the panel.