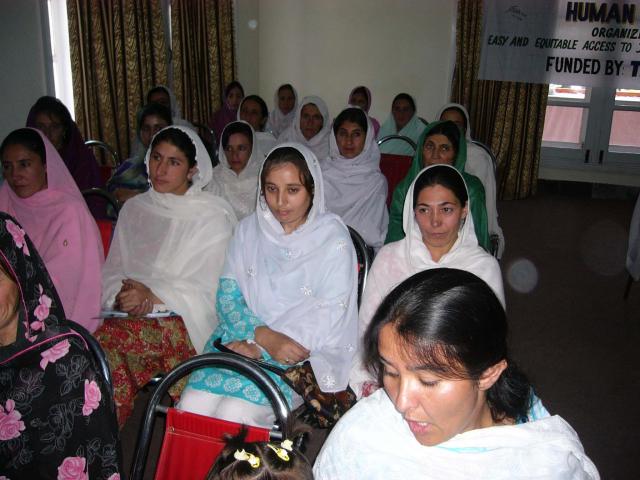 CHITRAL: To empower women folk of the society an awareness creation seminar were held at Booni some 75 KM from here that was organized by Easy & Equitable Access to Justice Program for Women of Chitral (EEAJP) funded by TORCAIRE Ireland. Niaz Ali Shah prominent human rights activist and Coordinator of the project briefed the participants in his presentation regarding women rights. The study and survey regarding women rights violation and their real status in the society was conducted by EEAJP with the financial support of TROCAIRE. Main objectives of the study were to identify gaps in implementation of women rights laws in Chitral. The study was consisting on three parts.  Current situation of women rights violations in Chitral, critical constrains, challenges and gaps associated with the implementations of these rights and third objective was to collect suitable recommendations from experts and masses to reduce the incidence of the women rights violation in Chitral.

Niaz Ali Shah pointed out current situation and discriminations in education that there are 565 schools for male but only 185 for female. Similarly 1827 schoolteachers rendering their services for boys but 606 female teachers for girls.  Quoting Discriminations in health sector he said that there are only 5 lady doctors in the whole district. He said main hurdles in the way of development of women folk is early and unmanaged marriage.  Their services and status also not recognizing by men segment and they are not involving in decision making, and they are not giving equal opportunities of employment. He said that only 15% women having jobs out of 9276 jobs in the district.

They are also depriving from their rights in heirs, property, as well as having no access to justice. The last component of the study was recommendations based on solution of these discriminations like changing attitude of the society through raising awareness, enhancing role of media, discouraging customary practices etc. Ghulam Shah Advocate reprehensive of human rights from Sub Division Mastuj also highlighted women rights in Islamic point of view as well as United Nation Human rights Charter. The other speakers who spoke on the occasion were Khwaja Nizamuddin Advocate President Booni Bar Association, Miss Laila Azmat Advocate who is the first lady lawyer practicing at Booni. The participants also passed a unanimous resolution and demanded for giving exemplary punishment to culprits who buried 5 women live with 2 innocent children at District Naseer Abad of Balochistan province. They strongly condemned this inhuman act.

They also demanded for establishment of a shelter house for oppressed and snub women of the district.. The speakers said that Islam has bestowed real status to women 1500 years ago. They urged on women folk to come forward and raise voice for their genuine rights while EEAJP will fully support them. The participants were emphasized to convey this message in their respective areas to approach EEAJP in case of any type of violations while 2 Free Legal Aid Centers have already been open for this purpose at Chitral and Booni which will be extended to other remote areas.

The participants demanded for establishment of Human Rights Monitoring Committee (HRMC) at far-flung and remote locality of Chitral like Broghul, Yarkhun, Brep, which is not accessible. A large number of men and women folk participated the seminar and demanded for continuation of this series for creating of awareness among the women folk because it will take long time to empower them.