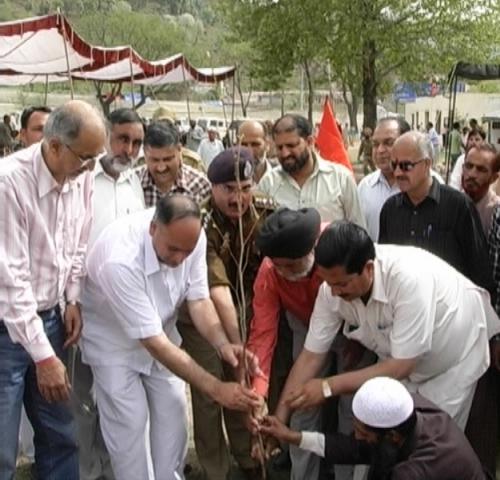 Jammu,March 21 (Scoop News) – J&K  Minister of  State for Forests, Environment, Power Shabir Ahmad Khan, has called upon the people State to  participate at a large scale in plantation drive in their areas. He said that planting of trees is essential tool to protect the rich environs of the ,

Speaking at a function, organized by , Manjakote, Rajouri, in collaboration with Social Forestry Department, to celebrate the World Arbor Day today, the Minister said that this day provides opportunity to all of us to plant trees and save environment. He said with the passage of time not only the population has increased but the need of individuals for forest products has also increased manifold.

The Minister said that providing neat and clean environment for sustenance and survival of humanity has become a vital concern in present times. He said Social Forestry Department is engaged in programmes of rehabilitating degraded forests and raising of plantation outside the demarcated forests on village common lands and strips along canal banks ,roads and railway tracks. He said the Government intends to bring all available areas under tree cover so as to meet peoples demands for firewood and fodder, besides providing some sort of livelihood through this activity as well.

On the occasion, the Minister launched the plantation drive by planting a sapling in the premises of the School and appealed the people, particularly student community, to plant at least a sapling every year to contribute to the greenery of the area.

Latter the Minister addressed public gathering at Galhutti, a hilly and remotest . He said the Government has launched a massive development plan covering all the three regions, especially far off and hilly areas of the State. He said that is marching fast towards peace and progress, adding that the day is not far when it become a prosperous State.

Regarding stock and supply of food grains at various sale outlets of CA&PD Department, the Minister said that ensuring adequate supply of food grains in all areas is the priority of the Government. He said the functioning of CA&PD Department is being streamlined and it has been resolve to provide every rationee his ration besides K. Oil and LPG before 25th of every month .He said instructions have been issued to the concerned authorities to ensure timely ration supply to people and any laxity on part of any officer or official would be dealt with strictly.

The Minister assured the people of the area that the Government has initiated various steps to transform the of socio economic condition of the people living in hilly and remote areas. He assured them that their genuine demands  would be redressed on priority.

The Minister also inspected under execution building at Galhutti coming up at a cost of Rs 18.00 lakh and directed the concerned authorities to ensure timely completion of the building.