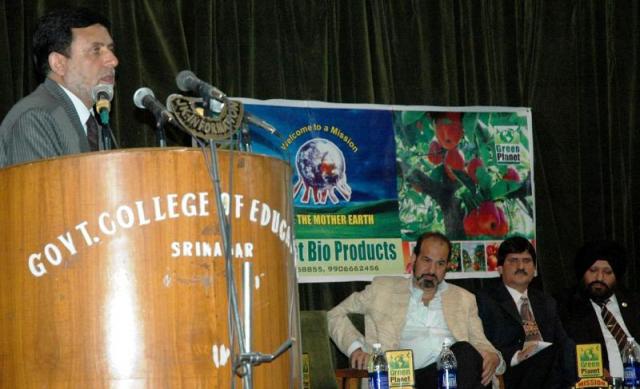 Srinagar, March 21- (Scoop News) –    Director of Information, and Press Relations  Khawaja Farooq Renzu  expressing his deep concern over the degrading forest which is a green gold of the Kashmir valley appealing all the people to come forward in a big way and extend full support for preservation and afforestation of our forests.

Khawaja Farooq Renzu was speaking in the function of Green planet seminar organised by world reputed pro environment organisation in collaboration with and SKUAST-K at today.

Renzu in his address shed light on the importance of massive afforestation and in this regard quoted Sheikh-ul-Alam (RA) who has said “Aan Posh Teli Yeli Van Posh” (Food is subservient to forests). He assured of his full support to those connected with the conservation and preservation of this green planet particularly .

He said it is also matter of concern for we all that massive constructions are being carried on the agricultural land which needs to be curbed at all levels. He said our horticulture produce is not presently getting the value it deserves and recalled those days when the fruit of Kashmir and were considered as the best.

Referring to educational scenario, Renzu said Kashmir will again become the seat and hub of knowledge as the is being established in the valley.

Referring to the ban on polythene, he said he involved religious scholars, teaching community, businessmen, government departments and even common people in anti-polythene campaign and this campaign got success to a great extent.

Earlier while welcoming the pro-environment personalities, the , Prof. Praveen Pandit and Dr. Farooq Agha of SKUAST-K underscored the importance of better environment and its preservation on the occasion.

Dr. Mushtaq Ahmad was the chief guest and Director of Information, and Press Relations, Khawaja Farooq Renzu was the guest of honour who presented key note address on the occasion.

Dr. Mushtaq and other renowned speakers while appreciating  Renzu for his bold initiative taken during his tenure as Commissioner, SMC for his complete success for stopping use of polythene in the valley of Kashmir. He, however, expressed its concern how this poisonous material has re-emerged and said necessary measures are required to control this polythene as early as possible.

A large number of people from across the valley, environment lovers, writers and students were present on the occasion.