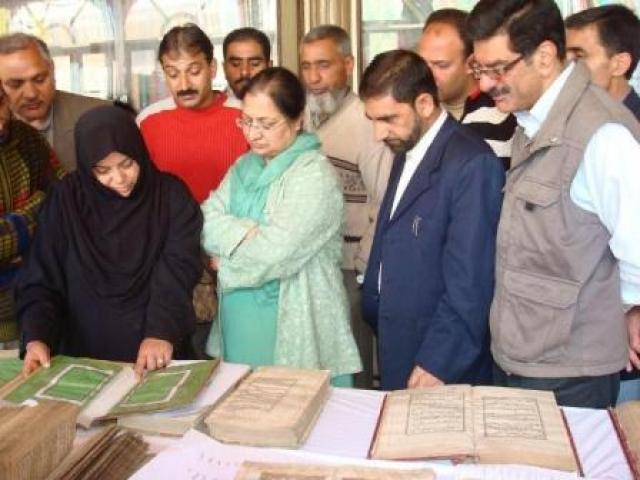 In , One day Book exhibition of Manuscripts and Rare Books was inaugurated today by Ms. Naseem Lanker Divisional Commissioner Kashmir at SPS Library Lal Mandi Srinagar to commemorate the World Book Day, by throwing it open for public.

The function was attended by Aamir Ali OSD with Div Com Kashmir, Bashir Ahmed Dy. Director Libraries, Mrs. Atika Bano Ex-Director Libraries besides many students and locals. More than 5000 manuscripts are available in the Research and Publicity Wing of the Libraries department, which is ’s largest Library of manuscripts. The oldest manuscript is “Kurbai Deen” written in 730AD .

The main attraction of the exhibition was the manuscript of Quran Sharief of 1554 AD. Divisional Commissioner Kashmir also inspected the and was informed that the work for the new block has almost been completed. Instructions were issued to J&K Police Housing Corporation to complete the work in the stipulated time so that the Artifacts can be shifted to the new building. The old museum building will be developed as a Heritage building and handed over to Libraries department for running a public library so that the habit of reading can be inculcated in our youth.

In , the Department of Libraries & Research as part of the observance of World Book Day in collaboration with the Department of Archives, Archaeology & Museums, Organized the exhibition which was inaugurated by the Minister for Tourism & Culture, Nawang Rigzin Jora. Minister of State for Tourism, Culture, Housing & Urban Development, Nasir Aslam Wani, Director Libraries, Archives and Archaeology, Khalid Bashir Ahmad and Deputy Directors Libraries and Archives & Archaeology, Rajinder Singh and Peerzada Muhammad Ashraf were also present.

The Ministers described the exhibition as very rich and interesting and hoped that people would be drawn in good numbers. On the request of the enthusiastic visitors, Jora announced extension of the day-long exhibition by two more days.
The exhibition proved to be huge attraction for lovers of books who saw in the displayed books and manuscripts a treasure trove of culture, theology, history and literature. In all, 138 old and rare books in English, Hindi, and Urdu languages, 30 manuscripts in Devnagri, Persian, Sharda, Arabic, Gurmukhi and Bodhi languages and 6 atypical photo albums were on display.

Speaking on the occasion, the Minister for Tourism & Culture said that there was nothing like reading a good book. He said books enrich readers mentally, spiritually and socially and spoke of the efforts of the government to popularize the culture of book reading.
Recalling that Jammu & Kashmir had been the proud centre of knowledge and learning in the past, Jora underscored the need to reclaim this status. He said inculcating the habit of reading, especially among youth, would help in achieving this objective. “There is need to create awareness and appropriate environment for people to take up book reading as fervor”, he said.

The Minister welcomed the holding of the exhibition of rare books and manuscripts as an apt step to commemorate the World Book day and said such events provided an opportunity to showcase our rich heritage. He said he was impressed with the collection of books and manuscripts in the exhibition on subjects as varied as history, culture, literature, medicine and religious scriptures and hoped that it would help in creating awareness about and interest in book reading.
Jora briefly dwelt on steps being taken by the Department of Libraries and Research in developing infrastructure facilities in public libraries across the State. He specifically referred to the construction programme and in-the-pipeline project of automation and computerization of public libraries.
The Minister of State for Tourism, Culture, Housing & Urban Development, Nasir Aslam Wani said that the World Book Day reminded us of the bond mankind had established with books ever since the first word came into being. He said people who had predicted a bleak future for books in the face of the arrival of television and Internet had been proven wrong. “Tens of thousands of titles published all over the globe annually is enough proof that book reading continues to be a human passion”, he added.

Wani said that the observance of the World Book Day was a pleasant reminder for us to explore the world that was hidden in bookstores, libraries and private collections. The two Ministers appreciated the efforts of the organizers in putting up, what they called, an excellent exhibition.
The Director Libraries & Research, Khalid Bashir Ahmad gave a background of the World Book Day and said that April 23rd was designated as such by the UNESCO. He said the tradition had its roots in the observance of Day in () on April 23rd when a rose was given with every book sold. He said the World Book Day served as encouragement for the authors to write new books. He said April 23rd was an occasion to renew our bond with the written word.

Khalid Bashir spoke about the steps his department was taking to improve the public library scenario in J&K. He urged people to urgently return the books that they had drawn from public libraries long back but failed to return.