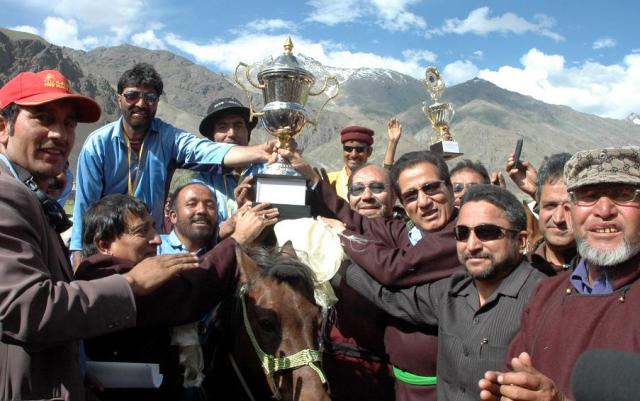 Drass/Kargil/Ladakh, July 23 (Scoop News) -The final match of the Chief Minister’s Polo Cup -2010 was played at world famous Polo-ground, Baltik today between the Drass A and Drass B teams. The match was won by Drass-A by 7 goals.

The Drass A team scored 7 goals as compared to 6 goals by Drass B.

The Minister for Youth Services and Sports,  R.S. Chib was  Chief Guest on the occasion, who distributed trophies among the winner and runner up teams.

The event, first of its kind, was organized by the J&K Sports Council in collaboration with Polo Promotion Club Drass. As many as 16 Polo Teams participated in the tournament.

A colorful cultural programme was also presented on the occasion by the local artisans, which enthralled the audience.

Speaking on the occasion,  Chib said that Polo game is an integral part of Ladakhis cultural legacy, adding that there was an urgent need to promote the game further to  match with the international standards. He assured that efforts would be made to upgrade the existing Polo Stadium to international standard. He instructed to include 31 teams in the next year Polo Tournament to broad base the event. He also assured a grant of Rs 1 lakh for  further development of the Polo Stadium.

Qamar Ali Akhoon also spoke on the occasion and assured of Government’s full support and assistance for upgrading the Polo Stadium, Drass.