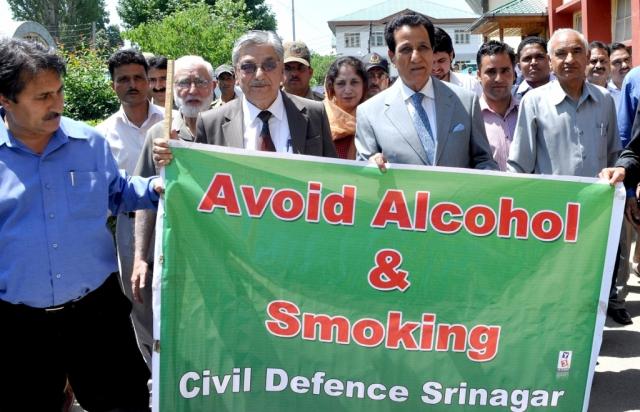 Jammu/Srinagar, May 31 (Scoop News) –    World No Tobacco Day was observed today  in Kashmir , Ladakh and  .

On this day each WHO observed World No Tobacco Day, highlighting the health risks associated with tobacco use and advocating for effective policies to reduce consumption. Tobacco use is the second cause of death globally (after hypertension) and is currently responsible for killing one in 10 adults worldwide. The World Health Assembly created World No Tobacco Day in 1987 to draw global attention to the tobacco epidemic and its lethal effects. It provides an opportunity to highlight specific tobacco control messages and to promote adherence to the WHO Framework Convention on Tobacco Control. Tobacco use is the number one preventable epidemic that the health. The WHO Tobacco Free Initiative (TFI) was established in July 1998 to focus international attention, resources and action on the global tobacco epidemic. TFI’s objective is to reduce the global burden of disease and death caused by tobacco, thereby protecting present and future generations from the devastating health, social, environmental and economic consequences of tobacco consumption and exposure to tobacco smoke.


On this occasion  JK Minister for Medical education, Youth Services and Sports R S Chib Tuesday has called for concerted efforts to sensitize people about the disastrous effects of tobacco consumption.

Speaking at a function held to observe world No Tobacco day here today, the Minister said that tobacco has been clinically proved as the main cause of cancer which affects millions across the world, adding tobacco is considered as one of the major threat to public health in 21st century.

The Minister called upon parents to observe their teenagers, saying adolescence is a vulnerable stage for falling to bad habits.

Divisional Commissioner, Kashmir Dr. Asgar Samoon said efforts are on to make and Budgam districts tobacco free by 2012.  He said all the Deputy Commissioners in valley have been directed to implement Anti-Tobacco laws forcefully to curb smoking and tobacco consumption.

Minister for Health Mr Sham Lal Sharma also called for massive awareness among general masses about the hazards of smoking and its other forms.

Dr . Samoon sought legislation to prevent the entry of tobacco at Lakhanpur and airports of the State.  He said the government has established counseling and de-addiction centres in the state to save the addicted persons.

Later, the Minister flagged off the rally in which participants holding pla-cards depicting slogans.

Representative from Voluntary Health Association of India Mr Bonoy Mathew presented a power presentation on the occasion and gave an overview of the measures taken by the Central government to control menace of tobacco.

To observe the World No Tobacco Day, Minister for Health & Family Welfare,  Sham Lal Sharma today flagged off a rally of school children at this morning. The rally took off from and culminated at SKICC.

The objective of organizing the rally was to create awareness among the general masses about the ill effects of smoking and tobacco products. The students pledged to spread the message in the society in a big way and save the human lives from the dreaded diseases like cancer, tuberculosis caused due to smoking.

Interacting with the media persons at the venue, the Minister said that only government efforts are not sufficient to purge the society from social evils and bad habits but coordinated efforts are required at different levels through mass movement. He said school children are the best ambassadors to circulate the massage and create awareness to develop drug and smoke free society.

The Minister maintained that media is playing important role in this regard giving due coverage to the noble cause. He stressed upon the voluntary organizations to organize programmes and help in sensitizing the society about the effects of smoking on public health.

The rally was organized by the Drugs & Food Control Organization in collaboration with divisional administration, health department and Voluntary Health Association, .

Like other part of the country World No Tobacco day observed at Kargil today. In this connection Health department Kargil has organized an awareness Programme at Jaffaria School Kargil wherein the speaker addressed to the student and staff members. Chief Medical Officer Kargil has thrown light on the hazard of smoking and the steps taken by the J& K Government to save the public from one of the major Health Hazard i.e. smoking. He expressed that sale of Tobacco and other tobacco products in an area within the radius of 100 yards of the Educational Institution is strictly prohibited and offence. of Tobacco products under the age of 18 years is strictly prohibited. Smoking in public places, Auditorium, Hospital building Court building Hostel, Restaurants, waiting room, Buses, Libraries and public convenience etc. is prohibited by law.

Latter on a school Rally was organized . The Rally was started from Islamia School Chock via main Bazar toChangra and back via Lalchock to C.M.O Office Kargil. The Rally was Flagged off by Executive Councilor Health LAHDC Kargil Jenab Ponchok Tashi at Islamia school Chock Kargil.
The department has geared up a checking squad who will impose a fine on spot under section 4 of the Act 2003.if any body found smoking at public places and other mentioned area.

At last Chief Medical Officer Kargil thanks to Principal and other staffs of Jaffaria School Kargil for given full cooperation to the department understanding the importance of the day.

In connection with World Anti-Tobacco Day, a function was conducted in district Budgam, today under the chairmanship of District Development Commissioner, Mohammad Rafi. The theme is “Women and Tobacco” this year.
On this occasion, the DDC stressed upon the youth to shun smoking as it is dangerous for the health for all active as well as passive smokers. He said anti-smoking act is already under implementation in the district adding anybody found violating the act will be booked under law.
On this occasion, the Chief Medical Officer, District Officers and students were present.
Meanwhile, the similar function was observed in , Sogam in Kupwara district by the Education department today.
On the occasion, the rallies and seminars were organised by the department of the said college regarding anti-smoking day.

The Principal of the also addressed on the occasion.

The Students of Government Girls High School (GGHS), Katra organized an awareness rally against the harmful effects of tobacco consumption to mark the ‘World Tobacco Day’.

The rally was flagged off by the SDPO Katra,  P. N. Tikoo and Naib Tehsildar Katra Rattan Singh.

The rally passed through main bazaar, bus stand, Dak bungalow road, Chintamam area and Banganga road where   students including NCC cadets of the school raised the slogans and carried placards to create awareness among the masses about the harmful effects of tobacco.

Earlier, various speakers, including Headmaster of the school, Harish Dubey addressed the rally. They threw light on the Anti-Tobacco Day and the ill effects of tobacco and its related products used by the masses especially by the children.

World No Tobacco Day in Udhampur

Over seven hundred students drawn from various   educational institutions of the town carrying banners and placards on ill effects of tobacco and its products like “Say No to Tobacco”, “Smoking Causes Cancer”, “Smoking is injurious to health”, “Avoid Smoking Save Planet”, “Smoking habit invites untimely death” etc. marched through the main locations of the Udhampur Town and   culminated at the Deputy Commissioner Office Complex Udhampur this morning.

The District Development Commissioner, Udhampur,  Baseer Ahemd Khan who was the chief guest addressed the rally.

The rally was organized by Guru Gobind Singh Study Circle Udhampur to mark the ‘World No Tobacco Day’.

Addressing the rally, the DDC complimented the organizers for creating  awareness among the  school children and masses in general about the threat of use of tobacco and its products.

Highlighting the relevance of the day, he called upon the younger generation to come forward and act as ambassadors to launch an anti-tobacco campaign. He asked the children to motivate their elders habitual of smoking to give up the habit forthwith to lead a healthy and long life.

Khan said that smoking is most rampant social evil not only in    but across the world. He hoped that the efforts of the organisers   involved in rally would go a long way in spreading awareness about ill effects of smoking and create a tobacco free society. He said that the district administration was also enforcing the anti tobacco laws to create smoke-free environments.

Among others, Tehsildar Settlement, Tehsildar Udhampur, District President of the NGO, S. Jasbeer Singh General Secretary Vikramjeet Singh, members of NGO were present on the occasion.