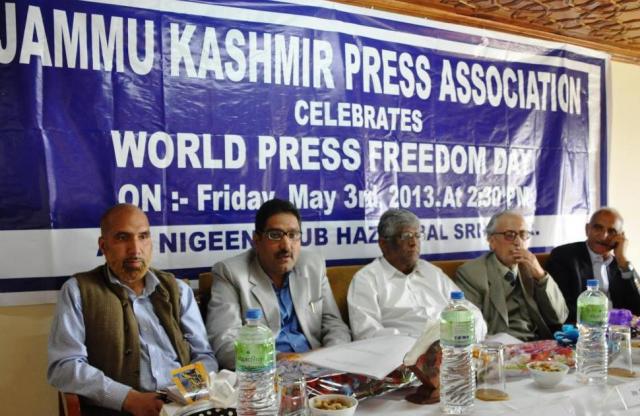 World Press Freedom Day is annually observed on May 03 to make aware the international community that freedom of the press and freedom of expression are fundamental human rights.

While speaking on the occasion, the press fraternity unanimously emphasized that for highlighting the significance of the freedom of expression in a democratic set up besides the challenges being confronted by the fourth pillar of the State.

They said responsible journalism is for responsible society and responsible State. The speakers urged upon journalists to play a healthy role in a democratic setup and report the day today issues of all the sections with transparency and in a fair manner.

Lauding the role of journalists in the valley, the speakers said that despite the challenging conditions, the journalists working in the valley have rendered their duties with enthusiasm and devotion besides highlighted the general public issues. They said lot more has to be done for the progress and development of the State besides urged for adopting the journalistic ethics.

They said that World Press Freedom Day gives people the chance to pay tribute to media professionals who rendered their services to the society. The Day is also an occasion for acknowledging the role and relevance of free media in our society, they added.

, May 03 (Scoop News) –    World Press freedom day was today observed at Kashmir University Media house auditorium which saw huge participation of journalists , media students , scholars  and teachers from and members from civil society . The event was organized by prestigious  Media Education Research Centre of in collaboration with press Association and sponsored by J&K bank.

World Press Freedom Day is observed each year this day world  wide and  marked by bringing together media professionals, press freedom organizations and UN agencies to assess the state of press freedom worldwide and discuss solutions for addressing challenges to freedom of press.

Prof. Riyaz Punjabi Vice chancellor said that freedom of press is something which we all cherish and we have to see  that it is protected  by all means and not tampered. VC who presided the event made a plea to the young aspiring journalists to keep their minds open and look at facts in true bold colours. Social reporting and Research on society and social issues  is something you need to pay attention to said VC to young journalists adding that  this area has a large spectrum  for work and needs our attention. Power of media is increasing with every passing day, said Vice chancellor adding  that with the addition of internet in the field no technology today has the power to shape our minds and opinions more  than media itself . He was all praise for the good work done by  the Media Education Research Centre (MERC) in contributing  towards professionalism in media and lauded its head and his staff for what he termed as the “exemplary work”

Ved Bhasin chairperson Kashmir times group of publications and chief guest at the event  paid  glorious tributes to those journalists who lost their lives for ”upholding freedom of press”. Saying that freedom of press was essential for the survival of a democratic society , Ved Bhasin spoke about the challenges being faced by the press both  from within and outside in the form of curbs and constraints  and said that the present ownership structure of media especially the control of corporate sector is one of the biggest challenges before the free press. Saying that free press is there to mobilize Public opinion.  Ved Bhasin lamented the way press ethics is being violated .

Senior journalist Ghulam Hassan Kaloo, President  Kashmir Press Association  in his address said that press is there to build public opinion and guard civil liberties.  Kaloo highlighted the achievements of his Association in the last 4  years in safeguarding the rights of  the journalists in and said that KPA  will continue to work for up holding the freedom of press at all levels . Saying  that  freedom of the press is essential for building up a democratic society  president KPA said that society as a whole is responsible to come foreword and help in this direction. G H  Kaloo said  that kashmir has lot of potential and talent  and he looks forward to the participation of this talent in media. Saying that social eveils are eating up the vitals of our society Kaloo said that society must come forward to hammer the monstrous head of social evil with all force.

Senior journalist   Altaf  Hussain from BBC spelled out the role of media and challenges faced by it in the global and local perspective. He said when journalists ask for freedom of press they are not asking for power but freedom to exercise their responsibility”. Saying that journalists are witness to history in making , he underlined the need for journalists to portray facts” in true bold colors and at no stage “in shades of grey” or in distorted form”. Despite various pressures from various sides to curb the freedom of press, press fraternity  here has been able to resist these pressures and  continued to do their work  with all honesty , sincerity and dedication.

Earlier in his welcome address Dr Shahid Rasool Head department of Media Education Research Centre thanked the Kashmir press Association for collaborating with university for world press freedom day celebrations.  He said that  the  United Nations General Assembly declared 3 May to beWorld Press Freedom Day   to raise awareness of the importance of freedom of the press and remind governments of their duty to respect and uphold the right to freedom of expression enshrined under Article 19 of the Rights. Dr Rasool highlighted the role of press  as a watch dog of the society and said that it  makes powers that be accountable to people . Dr shahid said that  Freedom of  press is not only desired but essential. Saying that  the emergence of citizen journalism is a welcome step Dr Rasool ,however said  that  power is not all about showing authority but shouldering responsibly while making reference  to the social responsibility of the press.

Senior columnist and producer  EMC KU  Ajajul Ul Haq said that freedom of expression  is the essence of life and one explores new dimensions of life while enjoying this freedom.  Ajaz, talked about  various shades of freedom and responsibility and said that  we need to understand various situations we are in for understanding  these concepts in right perspective.  Nasir Mirza senior Faculty MERC said that  Kashmir press today has gone a long way in restoring its freedom and its glory. He said that right to reply is one of the essential rights in freedom of expression and unfortunately some   newspapers deny readers this basic  right

MERC publications MERC times and Media times besides Kashmir Traveelr edited by Nisar peerzada  were released by Vice chancellor on this occasion.