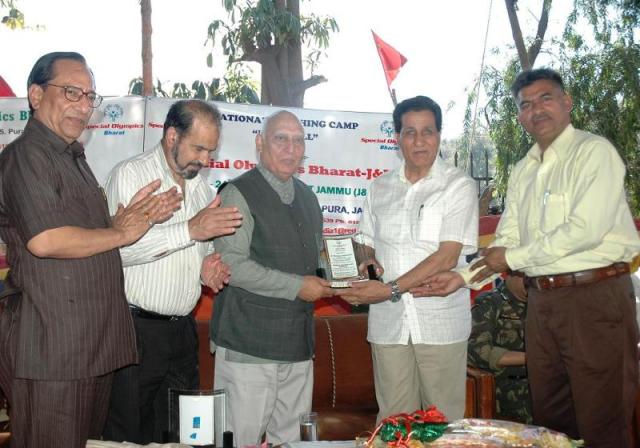 The Minister was addressing a function, organised by world reputed organisation, Special Olympics Bharat (SOB), J&K Chapter, having 6 lakh physically challenged persons enrolled. In his special address at Youth Hostel, Nagrota,Chib said that their hidden genius and talent is required to be explored by convening  special camps, workshops and conferences.

Chib, who is also the Chief Patron of the SOB, termed this special Olympics Movement as turning point for Special Athletes of the State, as our State is inherited with great potential and unique hidden talent, which needs to be explored and channelized through medium of sports to bestow them the graceful and dignified life.

He further wished this National occasion a success and also hoped that the event will culminate with marvellous results besides encouraging these special athletes to participate in a big way in such affairs at national and international level.

The Minister further assured that the Government will extend all support to SOB, State Chapter to strengthen this movement in the State.

Director Information, Khawja Farooq Ahmed Renzu, while addressing the function, said that we must give equal respect to the physically challenged people as they are also a very significant part and parcel of our society and are contributing a lot in almost every field of development.

Referring to the explosion of knowledge through internet and other scientific devices of modern times,  Renzu said that we should take advantage of the inventions and discoveries by imbibing the spirit of gathering knowledge in our younger generations.

Speaking about the visit of large number of special Athletes to the State,  Renzu said that they are the ambassadors of their respective States and will help in further strengthening  the bonds of brotherhood and amity.

Lauding the role of State President, SOB Dr. Ashvini Jojra in organising this seven day camp,  Renzu said that he is doing yeoman service for the humanity and his efforts will bring a revolution in providing relief to the victims of natural calamities and disasters.

State President, Dr. Ashvini Jojra, in his welcome address, said that the sole motive behind organising this programme is to fulfil the dreams of late Eunice Shriver, the founder of Special Olympics. He said that a glorious beginning has dawned in the State with the launch of Special Olympics Movement.

National Trustee, Chairman- North and Central India Air Marshal,(Retd) Ashok Goel in his presidential address said Special Olympics is an International Movement which came in in the eighties. Today we have the presence of SOB in 31 of the country. The State of J&K occupies a very important place in Indian context. The SOB started in J&K from November 2007. In this short period of just of 2 years the functionaries have done a splendid job.

He congratulated the State President Dr. Ashvini Jojra and Area Director Er. Mahesh Kinth and all executives for their achievements.