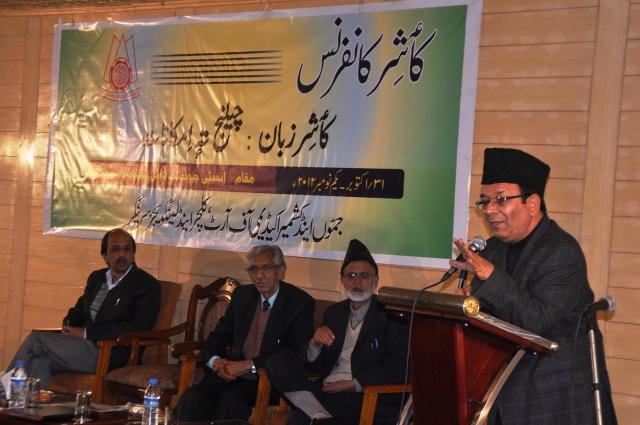 , October 31 (Scoop News) –   The 2-day conference on ‘Kashmiri languages: challenges and opportunities’ took off here today with a galaxy of scholars and experts deliberating on the issue and putting up suggestions to address it.

Organized by Jammu & Kashmir Academy of Art, Culture & Languages to promote languages, the conference has participants from within and outside J&K. It is a serious literary activity undertaken by the Academy in a long time. A similar conference on Dogri language will be held next month at .

In his address,  Rather called for collective efforts to off-set challenges confronting the Kashmiri language. He suggested to constitute a Task Force of prominent Kashmiri writers who could follow implementation of the recommendation of this 2-day Conference persistently with the higher authorities both at political as well as bureaucratic levels. He said Kashmiri language has centuries old glorious past with a rich treasure of literature and poetry adding that it is one of the rich languages in Northern India. He said Kashmiri language is spoken by about 66 percent population spread in length and breadth of the State including Kishtwar, Dachan, Marwa, Wadwa and Gurez. The language is also spoken in the Chamba , he added.

In his thought provoking address,  Rather gave a complete narration of the history of Kashmiri language, literature and poetry right from the period of sufi poets like Lal Ded, Sheikh Noor-ud-Din Wali (RA), Shams Faqir adding that the poetry of Lal Ded has been highlighted even by Time Magazine, New York. Likewise about 19 books have been published on the poetry of Sheikh Noor-ud-Din Wali (RA) in Kanad language.

Rather also quoted verses depicting richness of the Kashmiri in the fields of Sufism and mysticism, the legacy carried forward by Lal Ded, Sheikh-ul-Alam, Shamas Faqir and Rasa Javdani, romantic poetry of Rasool Mir and the revolutionary and patriotic poetry of even G.A. Mehjoor, Abdul Ahad Azad and A.R. Rahi who transformed it for progressive and socialist movements like “Walo Ho Bagwanoo Now Baharech Shan Paida Kar” Pholan Gul Gath Karan Bulbul Tithi Saman Paida Kar” who is not impressed by the Mathnavis of Wahab Hajni and “Gulrez” of Maqbool Shah Kralwari,  Rather reminded.

Rather lauded the initiatives taken by the Secretary, ,  Khalid Bashir to provide a platform to the think tank of Kashmiri language for seeking solution to the problems and challenges confronting Kashmiri language. He said struggle for promotion of Kashmiri language is a noble cause which needs to be pursued by the all stakeholders with more dedication and devotion.

The highlight of the post-inaugural session was an illuminating theme paper on the topic of the conference presented by noted poet and Gnanpeeth awardee, Prof. Rehman Rahi.

Earlier, in his welcome address, , Khalid Bashir Ahmad said that the objective of the conference was to take a holistic view of Kashmiri language in the backdrop of the challenges it is confronting with and the opportunities that lay in its way. He said that most of the languages of the word that were not oriented with employment or science and technology today face the issue of survival and Kashmiri language could be no exception. “It is very important to make the language relevant to the modern times to ensure its survival and promotion”, he added and hoped that the conference would generate fruitful and healthy debate unraveling many positives that otherwise remain hidden from the eyes in a situation of disillusionment.

Filed under: Media & Tech, World
Share Tweet Pin G Plus Email
previous article: Reliance Footprint in a tie up with Wiesner Worldwide Kreations
next article: Judgement Is God’s Right Only