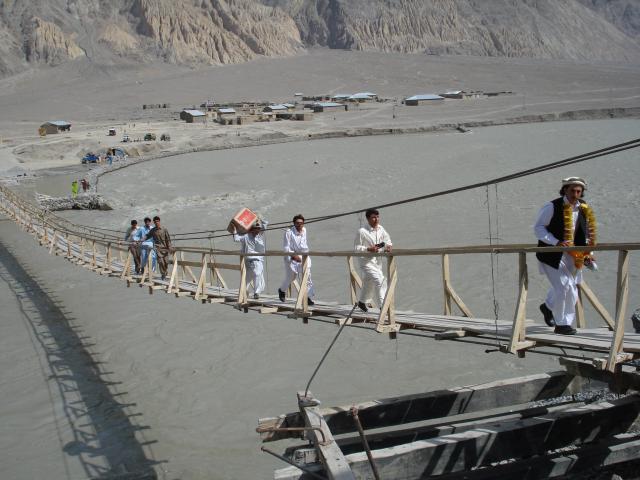 WINTER in most parts of Chitral brings miseries. But for the last over two years summer has become even more traumatic for the dwellers of the far-off Yarkhun valley. From April to October each year, residents in hundreds of villages dotting the valley on both sides of the river up to the Boroghil pass on the border of Afghanistan remain deprived of even free movement to and out of the area.

The only jeep-able bridge over the Yarkhun River connecting the valley of over 35,000 people with other parts of the district was washed away in August 2006. The stranded people have knocked all avenues for its reconstruction but the government has not moved to resolve the problem.

The previous provincial government punished the area by putting the project into the cold storage because the residents had not voted for the religious parties’ alliance. Without sanctioning funds, the district government headed by the MMA nazim last year asked a contractor to start work in order to hoodwink the public but the contractor soon left the area. The residents later voted en masse for the PML-Q candidates. Soon after winning the elections, MNA Shahzada Mohiuddin and MPA Ghulam Mohammad visited the area and assured the people that the project would now be taken up on a priority basis. The MPA later inaugurated work on the reconstruction of the bridge by opening a plaque at the site. But this time too the contractor stopped work after drilling a few borings because the provincial government had not sanctioned funds for the project.

The residents said they were facing untold miseries in travelling to other parts of the district. Women, children and the elderly are the worst affected, as they cannot cross the narrow, long and dangerously hanging pedestrian bridge which has become the only source of communication to the area. The bridge can become a death trap as its condition has dilapidated due to excessive use particularly by loaders shifting all types of goods. One person died while crossing the river near the destroyed bridge last year.

Taxi drivers have started looting the locals. Passengers having luggage or accompanied by children, women or sick persons in particular become their victims.

Supply of essential commodities to the valley has also been badly affected, resulting in unbridled rise in the prices. Local traders have fixed prices of essential items on their own, saying they pay extra fares to the transporters after crossing the bridge. The villagers used to supplement their income by selling fruits, vegetables and other agricultural products but now they have also been deprived of this source of livelihood due to the blockade of the area.

Even basic healthcare facilities are non-existent in the valley. A dispensary had been set up in the Dizg village by the district health department a few years back but later it was also closed down and the staff transferred out of the valley. The closure of the area has multiplied the miseries of those needing immediate medical treatment.

Students especially girls from Istach, Dizg, Khruzg and Mahting take the risk of their life by daily crossing the pedestrian bridge to attend schools in Brep. There is only one high school for boys in the over 200-km-long valley while no institution has been set up for girls to continue education after middle level.