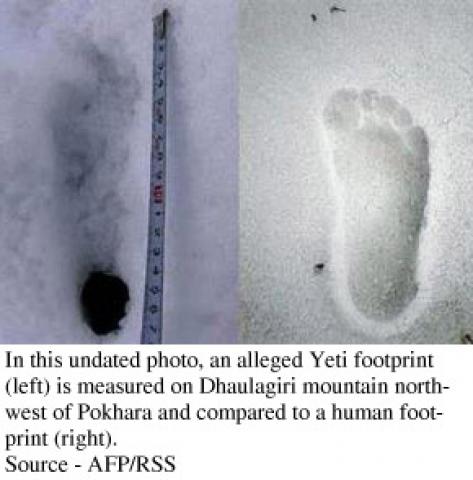 Recently, a seven-member Japanese expedition team discovered footprints of the legendary Yeti in the Himalayan Region of Nepal and Tibet reported the Agency France Press (AFP) on Monday. Yoshiteru Takahashi, the team leader of the expedition and the Yeti Project Japan, told, “The footprints were about 20 centimeters (eight inches) long and looked like human foot prints. We remain convinced it is real as we saw it walking on two legs like a human and looked about 150 centimeters tall. We spend 42 days on Dhaulagiri-4 — a 7,661-metre peak where previous Yeti encounters were made in the past though we failed to capture it in camera but we will come back as soon as we can, and keep coming until we get the yeti on film."