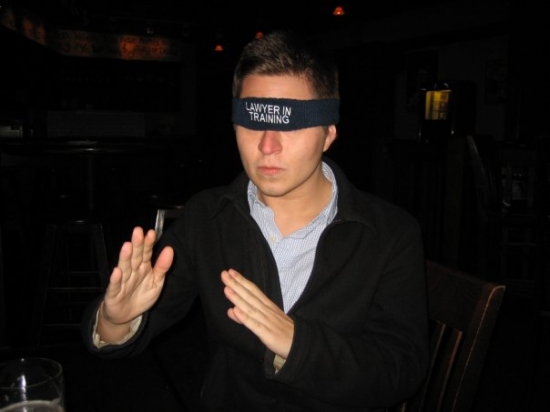 I will never, ever in a million years, or however long it takes for A Tribe Called Quest to release a reunion LP (not go on tour together, but put out a real album for goodness sakes), understand how some guys consider a certain girl "off limits" for reasons other than being family. Ever meet a group of guys who hang out with a girl who is attractive, and express your interest in said girl, only to be rebuffed with outright laughter and scoffing, capped off with comments like "Robbins? She doesn’t count, bro. She eats wings with us every other day!" In light of the disclaimer at the bottom of the "Compose New Report" page regarding obscenity, and out of deference to our fearless leader Rachel Sterne (hey girl!), I will simply say, "M********* that."

"She’s practically a guy! She watches Sportscenter and likes karate movies, some such traditional man-thing, etc." What these people fail to remember is that a woman is a woman is a woman. It’s not right for us as men to say that women can’t co-opt the things that we enjoy every now and then. Fear of being emasculated in certain areas of your life is no excuse. As a matter of fact, I would enjoy nothing more the company of a young lady who could occasionally help me take down a rack of ribs and belch a certain amount of decibels. To demand constantly that girls always be girly is to deny them the ability to truly express themselves in the ways they see fit. I’m not talking about unisex bathrooms, but a guy shouldn’t feel threatened by, or even sexually neutralized by, a girl who likes some of the things we do, and does some of the things that are traditionally the province of men. Remember the final seasons of Saved by the Bell where they had the leather-jacket clad badass Tori brought in as a new character? "Go out with you? No way! You’re a tomboy! Gross!" Take that garbage and sell it someplace else. In my eyes there is something sexy about any kind of woman, whether they’re in knee-high leather boots or those ninja-type ballerina slipper deals.

Of course this analysis excludes lesbians, whose lifestyles I am only really familiar with on the basis of a few independent films here or there. And on the flip side, I’ve heard men say things like "Entourage is like the male version of Sex and the City!," yet still claim not to be off limits to women, even though they probably are, but in a deeper, closeted way that they shouldn’t be ashamed of, and should embrace wholeheartedly (word to my Dad’s first cousin). Maybe it’s just a matter of preference; some are drawn to traditionally feminine types of women, and others may need to go to leather bars and engage in relationships that end in safety-words such as "Oklahoma," or "Piccadilly." All I’m saying is men shouldn’t count any woman out for a dumb reason like traditional gender norms. Be open to all of the many different types of girls you meet throughout your life, and maybe you will find that Danicka Patrick-type who will punch you in the chest on occasion, or the Kelly Kapowski-type who will big you up with some sort of coordinated cheer. Just stay away from the ones that go to shave their heads and immediately check into rehab, they are just kookoo-bananas.

P.S. I realize I mostly only write about women but if you went to law school and had nothing to look forward to for about 6 days a week, you too would come to understand that there is not much else worth thinking about besides love and booze, and if I wanted to spend time predominantly talking about the latter I would have just kept sending resumes to Modern Drunkard Magazine.