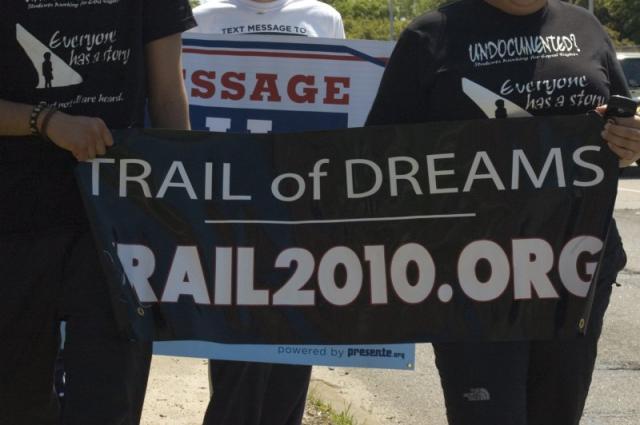 RICHMOND, Va. – Felipe Matos has been called many names, including “criminal,” “alien” and “not quite human.” All those descriptions come from the fact that he fits under the category of “undocumented immigrant.”

Matos and many others were brought to the United States as children by parents who didn’t have legal papers. As they grew up, Matos said, the young immigrants often faced “inhumane treatment” – including barriers to get an education.

That is what inspired Matos and his friends to lead a 1,500-mile walk from their homes in Miami to Washington, D.C.

“All we want is to be treated humanely.”

They are walking in support of the DREAM Act – whose full name is the Development, Relief and Education for Alien Minors Act. It’s a proposed federal law that would provide undocumented students with a six-year “conditional permanent residency.” Within the six years, the students would be required to earn a degree from an institution of higher education.

According to The College Board, a nonprofit group that represents institutions of higher education, there are an estimated 65,000 undocumented students in the United States. Currently, they do not have legal access to higher education or a way to obtain legal residency.

On Thursday, the “dream walkers” were welcomed to Richmond by Virginia Commonwealth University organizations including the Alpha Psi Chapter of La Unidad Latina and Lambda Upsilon Lambda Fraternity. The VCU students met up with Matos, Pacheco, Rodriguez and Roa at the corner of Cary and Belvidere streets. They all walked together through downtown and to the Capitol, where the dream walkers gave a press conference.

Roa said the walkers have encountered considerable backlash from anti-immigration groups; they were called “Mexican dogs” during their trek through Georgia. At the same time, the walkers also have received financial and emotional support from communities and individuals who believe in their cause.

“Everything that we have, even our shoes and socks, everything, has been donations that we received from members of other communities,” Roa said.

Jeffrey Limones, a member of Lambda Upsilon Lambda, said the fraternity’s mission is to provide equal access to higher education.

“We believe that higher education should be available for all students, whether undocumented or not,” Limones said. “You can’t lose to educate people. It’s a win-win situation.”

Equal access to higher education is what inspired Roa to join the walk.

“We want access to higher education,” he said. “We want to be able to contribute back to society and be fully integrated, which we’re not right now. That’s why we’re walking.”

The dream walkers plan to arrive in Washington on May 1 to greet an expected 6,000 people rallying for their cause. They also plan to appeal to President Barack Obama for an immediate end to all student deportations. Matos encouraged all those who believe to join the cause.

“It’s about millions of people,” Matos said. “And it’s about you who hopefully will take a stance to make sure that the laws are changed and that we can all live in a country that is a little bit more fair for everybody who lives here.”

For more information about the Trail of Dreams Walkers, visit trail2010.org.

Information about the DREAM Act can be found at http://dreamact.info.