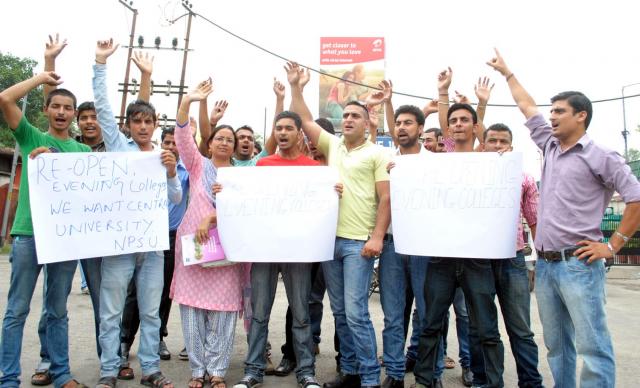 : National Panthers Students Union
(NPSU) and National Panthers Party (Youth Wing) held a massive protest
demonstration against the delay tactics of the State as well as Central Govt.
for the appointment of the Vice Chancellor of Central University for and issuing the orders for the closure of the
Evening Colleges of
region. The protest was held at Dogra Chowk which was led by Thakur Virender
Singh (President JU wing NPSU) and Papinder Singh (Leader of Young Panthers).

The activists of NPSU and Young
Pathers gathered outside the Exhibition ground near press club and marched
towards the main Chowk (Dogra Chowk) but were forcibly stopped by the police
and were not allowed to go on the road. The activists started raising slogans
against the State as well as Central Govt. and for the appointment of the VC of
the CU for
as well as opening the admission process for the Evening Colleges.

Addressing the gathering Thakur
Virender Singh lambasted the state government for issuing the orders of closing
the Evening Colleges. He said that it very unfortunate that the state government
led by NC-CONG coalition is hell bent to disturb the peaceful environment by
issuing one order or the other against the interest of the people of the region. He said
that the order for the closure of evening colleges of the region will create lot of problems for
those students who could not afford to take admission in the morning shifts
because of financial crunch or by any other reason. There are huge numbers of
students who used to do part time jobs and took admission in evening colleges
so that they can pursue their studies but by the closure of these colleges
these students will suffer a lot.

He further added that the other
states are promoting the Evening colleges whereas the govt. of J&K state
has issued the order for closure of these colleges of region without any reasonable ground
which is very unfortunate. He warned the concerned authorities to revoke the
order for the closure of these colleges or ready to face the wrath of the
students. He declared that NPSU will leave no stone unturned for the revocation
of this order.

On the other hand Mr. Papinder Singh
Gillu questioned the State as well as Central govt. for the loss of the student
community of the region by the delay in
the opening of the CU for .
He said that the students of the Jammu region have already lost their two
sessions by the dilly dally tactics of the State and Center govts for the
appointment of the VC of CU for Jammu. He said that NPSU and Young Panthers is
going to launch the agitation in the 1st week of July for the revocation of the
government order for Evening Colleges of Jammu region and appointment of the VC
for the CU of Jammu.

Filed under: Politics, World
Share Tweet Pin G Plus Email
previous article: Basic Information That Should Be Included in Writing a Resume
next article: How America Beats China by 2025