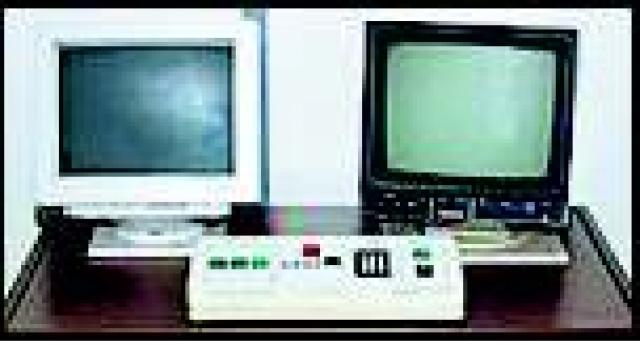 Your television can be a computer now!

The box — called @ Box designed by IChip Company of Hyderabad, India will soon replace a computer with Television as a multifunctional device. You require installing no CPU or monitor to access your computer now but the @box installed to the television works as a CPU and television screen as a monitor. Surprising! It is true. IChip’s CTO and president Kota Bhaskar has revealed these details in Hyderabad yesterday to the media. They are planning to release the same in to the market by March 2008 with very affordable price of $100 only (Approximate only)

The box — called @ Box — will allow the user to use his TV like a computer. The box will also allow regular TV programmes to be seen on the set through conventional cable system. All that the user has to have is a broadband connection. “If the user has a broadband connection, he can connect it to the @ Box and use his TV like a PC,” By installing the box, the user can discard a conventional CPU of a PC and also avoid a monitor. The box works like a CPU though with limited memory capacity and the TV screen will replace the monitor.

Developed indigenously, the @ Box technology is now ready for commercial deployment. IChip is in talks with manufacturers in Taiwan and China in addition to a couple of Indian cos for assembling the box for the market. “We are planning to price it at about $100 with an objective of making it affordable for all sections of the society,” Bhaskar said. The company is primarily targeting all those households having a TV.
IChip has developed a Linux-based operating system (OS) for the box and has designed two chipsets to run various applications for word processing, browsing and spread sheets. It also comes with 500 MB memory and additional memory can be added to the system through other external memory devices through the USB ports.
A wireless keyboard and a mouse is part of the package. “We are planning to launch the product by March. We are talking to some telecos too to offer the product to consumers along with their broadband services,” he explained. In addition, it is also talking to a TV manufacturer to make it part of TV.

Filed under: Media & Tech
Share Tweet Pin G Plus Email
previous article: Rioting in Paris Suburb Continues for Second Night
next article: Are You Going To Buy a Computer? Wait for a Moment!!