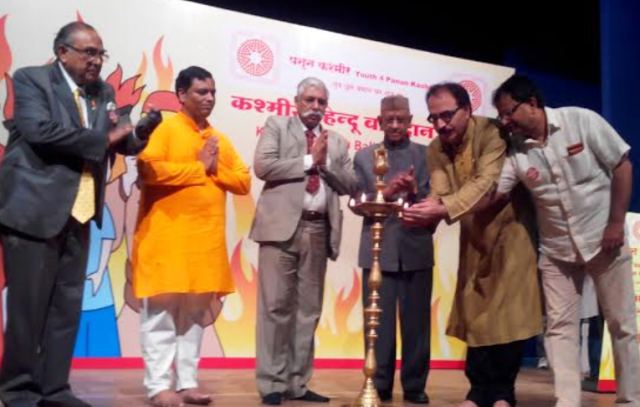 Pune, September 14,(Scoop News)- Youth 4 Panun Kashmir (Y4PK), under the aegis of Panun Kashmir, organized the Kashmiri Hindu Balidan Diwas, at Bhimsen Joshi Kalamandir in Aundh, Pune. This day is commemorated as martyrs day by the Kashmiri Hindus as it was on this day in 1989, the beloved Kashmiri leader Pt. Tika Lal Taploo was martyred, which led to a spree of selective torturous killings and eventual forced exodus of the Kashmiri Hindus from the valley.

The three main agendas that the program highlighted were to revisit the pain of exile, keeping alive its consciousness, and remember the mayhem that the community had to undergo in the 1990s and ever since. Understanding the point of view of Defense personnel towards the current security situation prevailing in valley and its co-relation with return and rehabilitation of Kashmiri Hindus. To analyze the current Political situation and a way ahead to highlight the Pros and Cons on the current feelers towards the return and rehabilitation of the community.

A strategic document of Panun Kashmir and its perspective was released on this occasion, specifically for its submission To Members of Parliament for their consideration towards return and rehabilitation policy of the center.

On the occasion Dr.Agnishekhar ,Convener Panun Kashmir said that “ It is shocking that the political class in the state and rest of India, as well as the successive governments at the helms in the state and the center, continue to downplay the growing influence of Pan Islamic ideology in the state.”

Dr. Agnishekhar reinstated that Panun Kashmir is hopeful that the new government in New Delhi will address the issue of return of Kashmir Hindus as an issue of religious cleansing and reversal of genocide and not as an issue of economic package. It hopes that the present government in the Centre will make a radical departure from its predecessors on the issue.
Maj Gen G.D. Bakhshi addressing the jam packed audience spoke about the security aspects related to Return and Rehabilitation of the Kashmiri Hindu Community. He said, “The biggest ethnic cleansing since world war happened in Kashmir in 1989/90, and we continue to keep it under the carpet. We need to make a holocaust museum for the Kashmiri Hindus.”. Showing solidarity with the Kashmiri Hindus he said, “The terrorist’s leaders of Kashmir should be tried in international court of justice, just as was done in case of Bosnia and Herzegovina.”

Col Anil Kaul, in his address stressed upon the importance of AFSPA in the prevailing situations in the valley. He explained the crucial role that is played by the defense forces to ensure peace in the region. He explained in detail how the army ensures the security of the Indian citizens in the Kashmir valley and how the army will ensure that the Kashmiri Hindus can go back to their homeland and lead a peaceful life with honour and dignity, with complete security.

Chairman of Panun Kashmir, Dr. Ajay Chrungoo talking on sensitive topic of global Jehadi terrorism : impact on Indian state and Kashmiri Hindus said “ Panun Kashmir is seriously concerned about the increasing influence and sway of militarized pan Islamic fundamentalism in the entire Kashmir valley and parts of Jammu. The recent developments in Kashmir valley should once again serve as an eye opener to the political class and the governments at the helms in the state and the Centre.”

The program also depicted the musical tribute to martyrs by Dalip Langoo and young artists from Pune , who sang the heart touching songs depicting their urge and feelings for their Homeland.

The program concluded by Vote of thanks By Rahul Kaul to all Guests, participants and activists of Panun Kashmir and its well-wishers who were present on the occasion.

Some eminent personalities who were part of this national event in person and online from abroad were Robert Spencer, Author and Anti Jihadi Ideologue,Dr. Phyllis Chesler noted Author of 114 books and Feminist Psychologist,Kapil Dudakia from Conservative Party of UK , Heading Hindu Youth and Sports council of Birmingham,Robert John Blackman, a Conservative Party politician in the United Kingdom who has been the Member of Parliament for Harrow,Veer ji Wangoo, IT Expert from Finland,Lakshmi Kaul Tiku, Entrepreneur and Communication Analyst , United Kingdom, Vinod Tiku, Entrepreneur from United Kingdom,Dr Amrit Nehru, Kashmir Hindu Foundation, USA
MORE AT http://scoopnews.in/det.aspx?q=40785