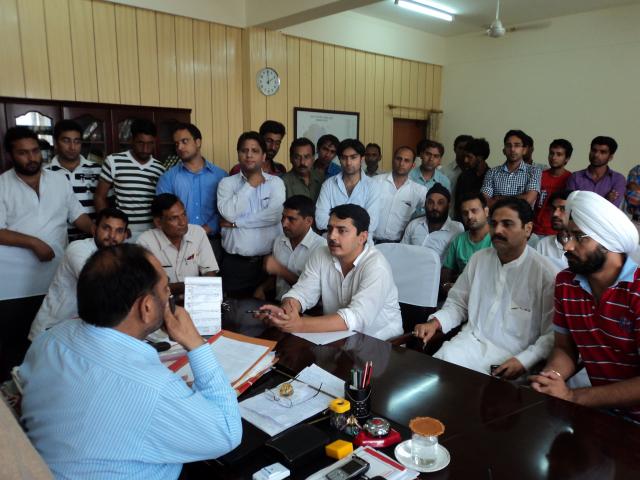 Jammu, February 27 (Scoop News) – While making a fervent appeal to legislators, close on the heels of the onset of budget session of J & K Legislative Assembly, Pradesh Youth Congress led by its senior Vice-President,  R. S. Pathania, has elicited fullest support and rather a consensus on fresh and equitable delimitation in the entire state since there is a striking difference of comparative votes and area-wise expanse of both assembly and parliamentary constituencies in either regions.

It is pertinent to mention that since establishment of popular rule in J & K, no effort has ever been made to rationalize the boundaries and vote-graphs of Vidhan Sabha and Lok Sabha seats in two regions. There might have been a self-imposed moratorium on increasing the total number of assembly seats but there is no bar on rationalizing the boundaries of assembly and parliamentary segments of J & K in tune with their respective populations and area graphs. Also, there is a glaring difference in providing funds, promotional fillip and sanctioning of schemes for promotion of tourism and beautification-cum-preservation of water bodies in regions. This has further increased the regional divide and complicated the peaceful political resolution of problem.


Pathania has further sought immediate operationalisation of Accountability Commission by filling up vacancies in it and by appointments of chairman of State Vigilance Commission, members of State Information Commission and nomination of chairman/members of State Human Rights Commission. He has sought formulation of policy decisions regarding regularization and wage-payment of SPOs, ReTs, ReZs and casual labourers working on Rs. 500.00 per month. He has also sought proper implementation of MGNREGA and legislative, infrastructural and procedural reforms in the Panchayati Raj Act-1989 for effecting true decentralization. He has further underscored need for a separate food law for our state and striking off the faulty system of BPL enlistment. He has further lamented that it has been commonly observed in both the Houses of assembly that very less time is devoted to discussion on vital issues and fields like public health, education, public distribution system, governance-related
issues, employment, etc