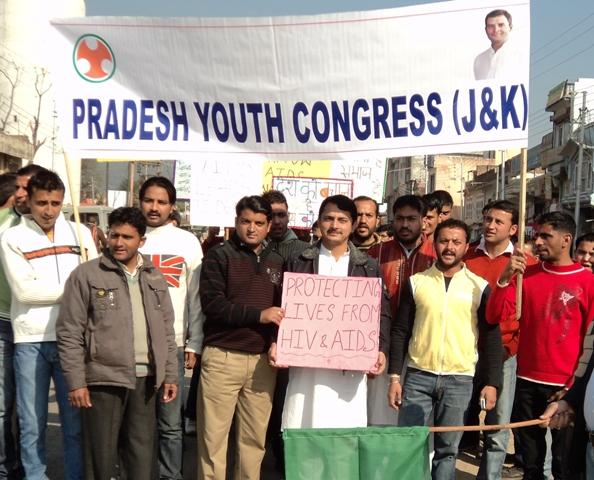 Udhampur/Jammu, December 03 (Scoop News) – ‘Say No To AIDS’ ‘AIDS Victims Do Are Humans’ ‘21st century youth is deadly against terrorism and AIDS’ ‘AIDS spreads by unsafe sex, unsafe blood transfusion’ were the main slogans on the placards held out by youth Congress activists in a massive AIDS awareness rally at Udhampur organized by Pradesh Youth Congress  R. S. Pathania, senior Vice-President, J & K P.Y.C. was in the vanguard of the said rally leading the show from the very front. The rally was flagged off by Brij Mohan Sharma, senior Congress leader from Udhampur. The atmosphere was charged with the sounding of heart-rending slogans by the youth congress activists.

Whereas the rally started peacefully from outside D.C. headquarters at Udhampur and passed through the main bazaars and streets of the area thereby culminating at Slathia Chowk, Udhampur, where the gathering came to be addressed by the Youth Congress leaders. While addressing the Youth Congress activists and people having come up there,  R. S. Pathania harped in detail upon the very essence and edifice of fighting against the menace on war-footing. He said that the menace poses a big threat for the youth of the country. He also elaborated on various preventions and practices to be employed by the people while keeping themselves aloof from the malady which poses a serious threat to international community. He further harped on the need of treating AIDS victims with utmost duty and compassion. He said that Congress is the first party to take lead in garnering consensus and public opinion against social issues.

Pathania was at the top of his lung-power and pitch in seeking an international consensus on concerted efforts and synergized techniques to curb the malady.    The congregation was further addressed by  Sumeet Magotra, Bharat Priye, Rajvir Manhas, Amit Manhas, Asif Iqbal, Manmohan Raina, Pardip,  and other Youth Congress leaders.