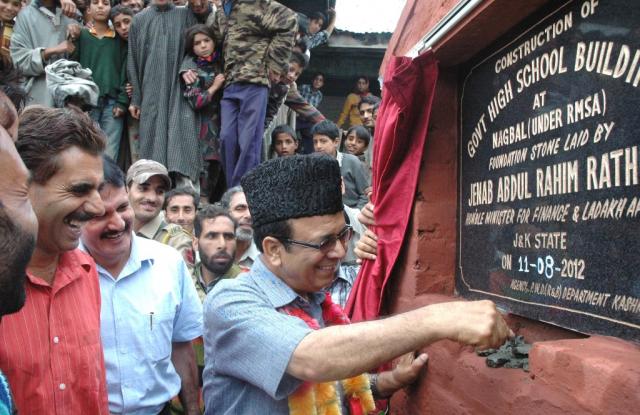 Budgam/, August 12 (Scoop News) –  The Minister for Finance and Ladakh Affairs  Abdul Rahim Rather today reaffirmed Govt’s resolve to develop all the three regions of the state equally irrespective of political considerations and ideologies. However special focus will be on backward and neglected areas.

Addressing a public gathering at Nagabal near world famous tourist resort Yusmarg, after lying foundation of Rs. 2.50 crore Govt high school building,   Rather said every part of the state will be provided equal opportunities of uniform development and justice adding that it is for the first time in the history of the state that special grants of Rs.50 crore have been earmarked in the current year’s budget exclusively for development of bad pockets which will be over and above the BADP allocation and Backward Region Grant Fund(BRGF).

Rather said that the famous tourist resort Yusmarg is being developed as a major adventure tourism destination as the virgin meadows and alpine slopes like Dragtolan and Barghah located in its vicinity needs to be showcased in  the world tourism market. He said a European Consortium through J&K Cable Car Corporation has started survey for construction of Gondola type ropeway between Yusmarg and Nilnaag. Every precaution would be taken to ensure the conservation of ecology and environment. He said the consortium has assured the Govt. that there will be no cutting of trees while erecting the ropeway.

Rather said that the upgradation and macamadisation of Charar-i-Sharief -Yusmarg road is in full swing at a cost of Rs.23 crore adding that it will be further fast tracked so that it is ready by the next tourism season for convenience of both domestic as well as foreign tourists visiting Yusmarg. He said the area has tremendous pilgrim tourism potential as there are two revered shrines of Charar-i-Sharief and Pakharpora. He said the tourism influx in Yusmarg would generate more economic activities which will ultimately benefit the local populace to earn their livelihood.  Rather said that the Yusmarg Development Authority [YDA] has already started face-lifting and creation of basic tourism infrastructure in Yusmarg. He advised the educated youth of the area to take up self employment ventures for earning their livelihood with dignity adding that Rs.90 crore have been earmarked in the current year’s budget for SKEWPY. The District Development Commissioner Budgam,  Khurshid Ahmad Shah, Chief Engineer PMGSY  Abdul Hamid, Chief Education Officer Budgam, Nazir Ahmad, C.M.O Budgam Dr. Aleem Din, concerned district officers and engineers accompanied the minister during the tour.