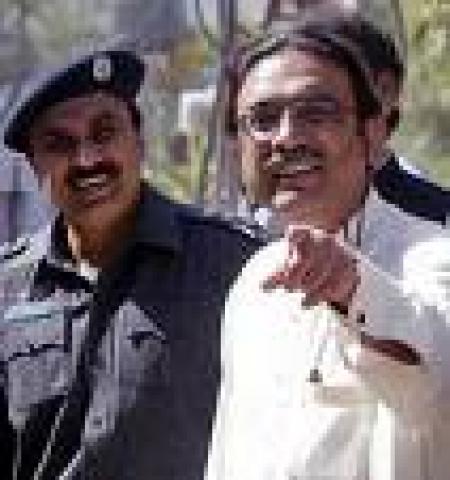 Islamabad –In the wake of Governor-rule in Punjab, President Asif Zardari has directed the Governor Punjab Salman Taseer to ensure the formation of Peoples Party government in the province within next two months, informed reliable sources.

A complete strategy in this regard has been chalked out by the top leadership of Peoples Party during a meeting held at the Presidency on Wednesday evening.

Important meetings with the Pakistan Muslim league (Q), Chaudhry Shujaat Hussain and his party’s forward bloc will be held in the coming days to ensure that both the parties join hands to get the majority vote for the PPP-led government in the province. PML (Q) in return would get due share in Punjab and may be given some important ministries.

Several names from PPP have sprung up for the post of chief minister Punjab but Qasim Zia remains the main contender. Sources further revealed that Salman Taseer might also get this slot in due course of time after getting himself elected to the provincial assembly but only after completing the first phase of this move which is to install a PPP government under Qasim Zia in the province.

Moonis Elahi, son of former chief minister Punjab Pervaiz Elahi is likely to be offered the office of senior minister in the future set up while some important ministries would also be given to PML (Q) members.

Governor Punjab Salman Taseer had held several meetings in the recent past with the chief of PML (Q), Chaudhry Shujaat Hussain and his cousin and president of Punjab chapter of the same party Chaudhry Pervaiz Elahi to win their hearts for any possible change in Punjab. Governor Punjab Salman Taseer has indicated all these developments to President Asif Ali Zardari and now after getting the green signals from the Presidency, Salman Taseer has decided to keep all the members of the PPP and PML (Q) including their forward bloc group at various hideouts before summoning the session of the Punjab Assembly to elect a new PPP-led government in Punjab.

Sources further confided that some guest houses and accommodations have been arranged in Murree and surrounding areas of Islamabad for the Punjab MPs to make sure that desired strength is achieved before summoning the next session of Punjab Assembly for formation of a new government.

Currently, Punjab assembly has a total strength of 371 members out of which 297 are directly elected while 74 are elected on proportional representation basis to give representation to women and non-Muslim candidates of the elected political parties.

But in the run up to the elections of the chief minister Punjab in 2008 April, about 38 members of PML (Q) had formed an unofficial forward bloc in the Punjab Assembly and voted in favour of now-disqualified chief minister Shahbaz Sharif.