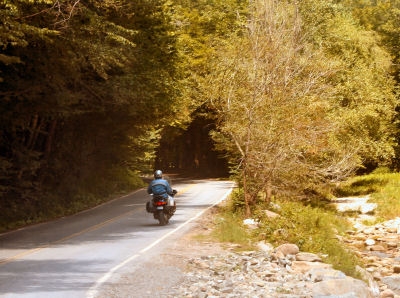 I rolled up to the light and stopped, the muffled throbbing of the engine beneath me the sole sound in the morning air, the only other movement the sun rising slowly over Westchester, warming my back. A cool brisk wind blew out of the northwest. From here, I could see the entire span of the Tappan Zee Bridge, in my opinion, the prettiest of the great bridges.

Above me, the single contrail of an F16 trailed south. I always look at airplanes differently now and I had a flashback. On that Tuesday morning five years ago, I had sat in my car at this same light listening to a woman’s hysterical eyewitness account of what would change all of our lives and out perceptions forever. I did not know until an hour later that flight 11 had gone right over my head, en route to Tower Two

It occurred to me that I might not ever get across that bridge if I didn’t do it now. When the light changed, I leaned into the turn, swung through the entrance ramp and pointed us towards the gentle upgrade of the bridge proper.

There is a certain aura, a sense of freedom attached to riding a motorcycle. I had owned my first bike in the time of Easy Rider, and sold it three years later to pay for a European plane ticket. The particulars of that trip have been lost to memory, but recollections and stories of early morning runs, hills and valleys, the wind in my face and the pull of a motor beneath me have always remained fresh. I’ve always regretted selling it. Each spring, seeing the growing number of bikes on the road, I would say to myself, “this year is the year”.

I ignored the statistics, decreased reaction times age had brought on, total ignorance of anything mechanical and the increased sophistication and power that present-day motorcycles possess. I had to have one. Fiyears ago, I made good on that promise to myself.

I harbored no illusions of being a RUB—Rich Urban Biker, prepared to spend the price of a new car on a state-of-the-art Harley, Indian, or BMW–an image that I could not live up to. I had never lost the feel of the road in my bones, and I just wanted a bike. I did not consider myself a “Biker”. I was excited picking up a fourteen-year old machine,  thrilled getting back in the saddle, irked when I found it wouldn’t go over twenty miles and hour, terrified at that speed on open highways, relieved and ecstatic shutting it down in Tarrytown.

I knew nothing of the mechanics of motorcycles, or anything mechanical for that matter. Cars have never been anything to me but transportation, albeit some are prettier than others. Growing up in the city did not lend itself to making me a “motorhead”. My idea of a tool kit included a sledgehammer, duct tape, chewing gum, paper clips, and the phone number of the nearest mechanic.

The ethos of the biker world, I quickly determined, dictated that I not only ride, but also maintain my “ride”. The motorcycle had me hopelessly outgunned. I knew how to ride it, but barely, how to put gas in it, but not what kind. Oil? Chain adjustment? Carburetor tuning? Stators? Wet sumps? Torque? Compression ratios? Fuhgeddaboudit.

The following week, I took the bike to the shop. A tune-up revealed a loose throttle cable, leaking front fork seals and oil that had not been changed in a very long time. I let the mechanic do the work. For what remained of the riding season, I practiced nightly in empty corporate parking lots, absent any witness to my foolishness. When I got daring, I ventured out to local small roads around town, suffering the indignities of my errors in public.

I harbored no illusion about my diminished skills or returning to my old riding habits. Venturing afield locally, I enjoyed my early Sunday morning rides, until I worked up the courage to head south to mid-town. At first terrified, I forced myself into thrice-weekly trips, until I moved through the traffic fluidly. I handled steel deck bridges and steel plate construction sites, held a steady straight line in the Park Avenue tunnel, and been the lone iconoclast in a sea of yellow cabs and trucks that were in my mind using me for a target.

Seeking easier roads and greener pastures, I turned north to the country and the mountains. I negotiated twisting gravel-strewn Catskill two-lane blacktop’s in pouring rain, caromed off a shaded curbline, bucked 30 mile per hour headwinds, and dealt with the heart-pounding shock of looking in my rear-view mirrors and seeing nothing but the grill of loaded tractor-trailer ten feet behind me. At sixty miles an hour. I loved every minute, every mile of it.

Motorcyclists measure their level of expertise in the miles they ride, much as pilots count their air hours. I rode five thousand miles that first season, and went nowhere. Mechanically, I was proud of myself. I had changed the handlebars, replaced the exhaust system and shock absorbers, installed coasters and relocated the rectifier. I was particularly proud of the latter two modifications, not having had any idea of their existence or purpose. My education in the Zen of Motorcycle Riding and Maintenance had begun.

The Motorcycle had become my “ride”, or “scoot”, and when I’m in the saddle, I think of it as “us”. My season ended when but not how I had expected. Taking advantage of a spring-like November day to ride, I pulled up at a traffic light behind a white van. Looking forward to a leisurely breakfast, my thoughts were interrupted by the sound of screeching brakes behind me. I felt the crunch, the bike shot out from under me, and I was looking at the sun between my feet as I went up and over, all two hundred and thirty pounds coming down on the back of my head and shoulder.

The shooting pain in my shin allayed fears of paralysis. Sirens, a stretcher, the ambulance and the ceiling of the Emergency room are my memories of that day.

Four months after not giving the trauma team any reason to eviscerate me, the physical therapy behind me; I was on a  newer two-year-old machine, sitting at that traffic light, looking at the Tappan Zee Bridge.

I exit at Nyack as soon as I crossed the bridge, heading north through town on route 9W, through the sleeping Rockland County, past condo developments that seem to sprout up overnight.

Everything is working well, and I roll along, the motor throbbing routinely beneath me, lulling my senses. I could be doing this in a car more safely, and just as efficiently; able to drink coffee, smoke, listen to the radio, use a notebook, tape recorder, cameras even.

On the bike, I am a slave to the laws of physics that will keep me upright and rolling. All five senses, both arms, both hands, both legs, both feet, ten fingers and ten toes are part of the process. Riding is total involvement with the machine. It is total freedom.

The deer in the horse paddock feels part of my world, as does the blast of wind from the pickup that blows past me, its mirror missing my elbow by mere inches. The I feel the sensory ripple of every grain, every bump rise and dip of the tarmac through the tires and suspension system, while watching for the smallest pothole, patch of sand, or scattering of gravel that will put me down. There is nothing between my head and the road but air and my wits.

I love these early morning hours. The air is clear, the roads empty, and the silence golden. I feel the cool on my face, seemingly blowing through my head, clearing the cobwebs, clearing the thinking, unblocking the block.

I settle into the Zen of it, letting my mind wander, and becoming one with the bike. It knows where it wants to go, how to go, and how fast to go better than I and I let it have its head. Across the river, I can see the Indian Point nuclear plant and the boats on the water I roll north, passing a high school atheletic field. Flashes of scarlet, gold and white—a sunrise soccer game–streak across the bright green of the field surrounded by the red clay track. It all seems in harmony with the foliage on the hills that overlook this pristine vision of small town America.

A fighter plane passes overhead There is little traffic, and I have the open road ahead of me, my rear view mirror mostly clear, save for a few early churchgoers who zip by me anonymously, harmlessly. I check it constantly, an old habit, and otherwise let my mind wander.

Suddenly broken glass, shards of metal, a headlight rim and a hubcap–the detritus of someone else’s misfortune and momentary lack of attention–snap me out of my reverie. The debris is just past two sets of skid marks intertwining, veering off to both shoulders, the dead doe a few yards further off the shoulder. I roll past the scene, mindful that Bambi can kill me.

I turn onto the Bear Mountain Parkway, cross the bridge, and negotiate the twisties south of the overlook that terrified me at the beginning of the summer, but now thrill me. I hit the flat just north of Camp Smith, to fall in behind an armed Humvee with a fifty caliber mounted on its deck. I pass it and hold a steady 80 heading south alongside the river.

A group of what three years ago I would have considered a gang of black-leather clad Huns pass in the opposite direction. I hold my arm out in what has become my last-scene-from-Jeremiah-Johnson wave. A few return the time-honored gesture. On a whim, I turn left at fork in the road to seek out some more blacktop, other nooks and crannies.

At a stop sign, I turn right, up the one lane blacktop lane that has always piqued my curiosity that I’ve never taken the time to satisfy. It only runs up about a quarter mile. I find horsefields across the road from corporate parks, an old crumbling barn and 1909 firehouse in the shadow of modern condo development. Now I’m happy.

Turning around, I head home. It is one of those scenes that you see in films. Accelerating up a short hill, I crest the rise to the thousand-yard straightaway, just as another rider crests the other end, coming my way. As we close, I check my mirror. There’s nothing behind me, nothing behind him either, and nothing between us. For one brief moment, we own that road, and we are the only two riders in the world. He is a shadow, the sun behind him, and I loosen my grip on the left bar, let go, and extend my gloved hand straight out. Will he return the gesture? I see his left hand come off the bar, and we pass, arms extended. I am a Biker.