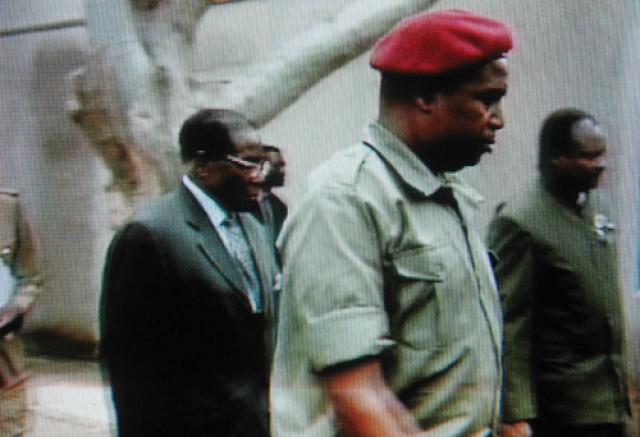 By Meshack Ndodana in Harare.

With a run-off between Robert Mugabe and opposition leader Morgan Tsvangirai looking increasingly likely, there are signs that the Zimbabwean regime will launch a crackdown to ensure victory for the incumbent at all costs.

The Zimbabwe Electoral Commission, ZEC, is dragging its feet on announcing the official result of the presidential ballot, although it has said that Tsvangirai’s Movement for Democratic Change, MDC, won the parliamentary election also held on March 29.

Although the MDC has claimed outright victory, most observers think that when the ZEC announces the final figures, neither of the top two candidates will be awarded over 50 per cent of the vote, requiring them to contest a second round.

Tsvangirai’s MDC faction – the bigger of two that contested the elections – initially said that it would take part in a second round, but changed its mind after reports emerged that pro-Mugabe war veterans, youth militia and armed forces had been deployed in rural areas.

Now it says that in order to protect Zimbabweans from a wave of political violence, it will boycott a run-off vote unless the United Nations is invited in to observe the elections.

Tsvangirai warned journalists that ZANU-PF would use violence to ensure victory for Mugabe.

“ZANU-PF is preparing a war on the people such as we saw in 2000 and 2002 [elections]. The run-off is thus a ‘run-over’ of the people,” he said. “I, Morgan Tsvangirai, the legitimate winner of this election will not participate in the run-off. If President Mugabe thinks he can bulldoze his way into a further era of illegitimacy, then history will judge.”

The consequences of a second election surrounded by violence would be dire, said the opposition leader, who predicted, “A run-off will polarise and traumatise this country. The country does not need another war.”

Tapiwa Mashakada, a senior MDC official, told IWPR that his party would not help legitimise Mugabe by taking part in a second round.

“We are not going to expose our people to violence. A run-off is going to be bloody, and we are going to see some of the worst violence ever. We will only participate if a United Nations observer mission is invited to monitor the elections,” said Mashakada.

With the parliamentary election handed to their opponents, ZANU-PF officials have everything to lose if Mugabe fails to win a new term.

A member of the party’s governing body or politburo told IWPR that ZANU-PF did not trust Tsvangirai, not least because they feared he would take away the farms awarded to many regime insiders by Mugabe’s 2000 land reform, in which white farmers were forcibly dispossessed.

The politburo member said Tsvangirai might also sanction the prosecution of Mugabe and others named as culpable in the “Gukurahundi” killings of the Eighties, in which Mugabe’s military stand accused of murdering large numbers of civilians in a bid to eliminate political opposition in the Matabeleland and Midland regions.

“Unfortunately, no matter what Tsvangirai says about guaranteeing President Mugabe’s safety, we just cannot trust the man,” said the ZANU-PF insider. “So if one day he gets a call from [British prime minister] Gordon Brown or [United States president] George Bush and is told to arrest Mugabe, do you think he won’t do that and will say, ‘I gave him my word’? Obviously not.”

The politburo member was referring to Mugabe’s oft-stated view that Britain and the US are to blame for Zimbabwe’s problems. Statements by Bush and Brown that Mugabe must step down have merely made him more determined to win the run-off.

“If he loses, then Mugabe would have lost to the British and the Americans and to quote him, ‘never, never, ever, ever’ will we let that happen,” said the politburo member.

He concluded by warning, “We will protect our president and ensure that Tsvangirai does not go anywhere near State House.”

A former guerrilla from the 1970s war of liberation admitted to IWPR that he had committed murder during an earlier election campaign, and insisted that war veterans would never let Tsvangirai take over.

This man feared a Tsvangirai victory might lead to retribution against people like him. “I have killed, and I am not the only one who has killed. Who will protect us if Tsvangirai comes into power? We are not going to let him win. Mugabe is going to continue ruling this country,” he said.

The performance of both Mugabe and ZANU-PF, scoring more than 40 per cent of the 2.4 million votes cast on March 29, belies the expectations of some who expected voter support for the regime to collapse because of the unprecedented economic decline that has left the country with the world’s highest inflation rate.

Since life is close to unbearable for many Zimbabweans, it might seem strange that Mugabe should still get so many votes.

However, Zimbabwean politics run deep, and calls for a fresh start are only part of the picture. The present political environment cannot be divorced from the role of ZANU-PF, and Mugabe personally, in the 1970s war of liberation and in the violence of the post-independence years. Many people, particularly the younger generation, underestimate the effect of Mugabe’s credentials on rural voters.

In the Seventies, ZANU’s armed wing, the Zimbabwe African National Liberation Army, ZANLA, left a deep imprint on the ethnic Shona provinces from which it operated, and still affects voting patterns there.

“The legacy of the liberation struggle has left a deeper memory in rural areas than in urban areas,” said Sabelo J. Ndlovu-Gatsheni of the Ferguson Centre for African and Asian Studies at the Open University in Britain. “Memory of a rural guerrilla is in fact a memory of ZANU as an emancipatory force. This memory will take time to pass from peasant consciousness. ZANU is reaping dividends from this consciousness.”

Ndlovu-Gatsheni explained how during the insurgency, “ZANU imbibed Maoist mobilisation strategies of the ‘fish and water’ type – the rural peasants became the sea within which ZANLA forces played their politics”.

The post-independence period saw the mass killings of the Gukurahundi campaign, conducted in ethnic Ndebele areas, and later on, violence used during the seizure of white-owned farms and in the election campaigns of 2000 and 2002.

The people involved in past violent action to uphold ZANU-PF’s rule have so far enjoyed impunity, and can be expected to do what they can to ensure Mugabe stays their president.

Pre-election violence was notably lacking ahead of the first round, and the MDC was able to penetrate constituencies seen as no-go areas. In the southern Masvingo province, for instance, the MDC won more than half of the parliamentary seats; it won an absolute majority in Manicaland and also snatched some rural constituencies in the ZANU-PF strongholds of Mashonaland East and West and the Midlands.

Many fear Mugabe will not allow this to happen again. The deployment of ZANU-PF militants and war veterans to secure victory would raise the prospect of violent clashes with defiant MDC supporters.

Despite these fears, some ordinary voters told IWPR that the MDC should go into the run-off because people would come out in large numbers to vote against him.

“I hope the MDC won’t let us down by refusing to contest the run-off,” said Harare resident Mary Musodzi. “I can tell you that Zimbabweans, who all this time thought it was impossible to beat Mugabe, now realise that people can actually vote him out. Those that did not vote will go and vote, and Mugabe will lose badly in the second round.”

Meshack Ndodana is the pseudonym of a reporter in Zimbabwe.  For more in-depth coverage, go to www.iwpr.net