On Wednesday, September 24, a conference on occasion of termination of prosecution of Iranian Resistance in France was held in Paris. Mrs. Maryam Rajavi, President-elect of the Resistance, as the key speaker of this great conference called the collapse of this file a victory for justice and resistance, a defeat for the demonizing campaign, as well as an accomplishment for all of humanity that is fed up with tyranny and fundamentalism. She said: In this dossier, the French judiciary became a tool of the mullahs’ regime, but now, as Henri Leclerc the renowned French lawyer put it “the French public prosecution service showed that it can refrain from kowtowing to the political considerations”. It is time for the French to save their politics, diplomacy and intelligence services from the poison of the Iranian religious dictatorship. It is time for France to show firmness and dismantle the Iranian regime’s network of agents and IRGC’s front companies and organizations in France and Europe. 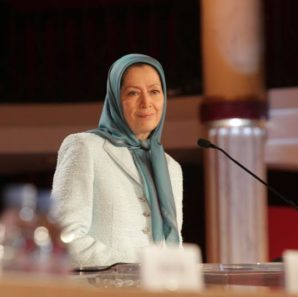 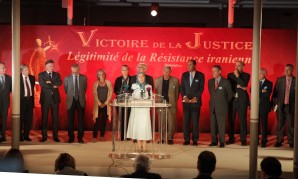 All charges in this judicial case in France against the Iranian Resistance, ongoing since 14 years ago, were dropped last week in a historic verdict by the French judges and this file that lawyers and judicial experts consider it one of the longest judicial cases in the France’s contemporary history was closed for good. In this conference, a large number of political figures and the most prominent French jurists, along with the board of lawyers of this case, were present. Rajavi stated: The crime of those who opened an empty dossier in collaboration with the mullahs to destroy the Iranian Resistance is not just a breaking of the law and undermining justice or even abusing the judiciary, their real crime was to pave the way for the demon of fundamentalism. She underscored:

The deadly mistake by French and Western governments in the past years led to the catastrophic diversion of combating terrorism. The inception and growth of extremist groups such as ISIS is a direct consequence of years of appeasing its godfather which is the regime of Velayat-e faqih. Building up empty and discredited dossiers against the Iranian Resistance which is the anti-thesis and viable alternative to fundamentalism was the greatest incentive to this regime to incessantly sow the seeds of al-Qaida and ISIS and etc…..in the entire Middle East and Africa, particularly in Iraq, Syria, Lebanon, and Yemen, in the past three decades. 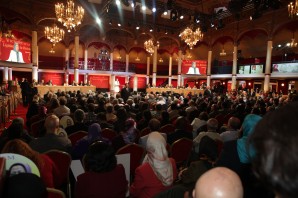 On Wednesday, September 24, in a large conference held in Paris on the occasion of closure of the judicial case against the Iranian Resistance in France.

In another part of her speech, Rajavi welcomed France’s stepping forward to resolve the Iraq crisis and to confront ISIS and warned the parties who insisted on giving the Iranian regime a share: You are falling into the mullahs’ trap; instead of containing the crisis in Iraq this shall enflame a Shia- Sunni war and rebuild the Iranian regime’s domination in Iraq. The anti-thesis of Velayat-e faqih, and the fundamentalism and barbarism it has created is the democratic Islam that is represented by the People’s Mojahedin Organization of Iran; a tolerant Islam removed from compulsion, intimidation, beheadings, and despotism whose message is brotherhood, equality, forgiveness, and justice. Rajavi called on the French government to assume the leadership of a humanitarian initiative to provide the minimum requirements to guarantee the safety and security of the freedom fighters in Camp Liberty until all of them are transferred out of Iraq. She called on the French government to support the complete annulment of the anti-human siege on Liberty, especially its medical blockade; to end the prison-like condition in Liberty; and to have this camp that is nothing but a prison, be a refugee camp under the United Nations’ supervision. She said that the Iranian people want France to stand with them, rather than the religious dictatorship.

On September 16, the Counterterrorism Prosecuting Judge of Paris Public Prosecutor’s Office ordered the final termination to prosecution of a case that had been opened 14 years ago in collaboration with a plot by the mullahs’ regime aimed at destroying the Iranian Resistance. The case was opened with the absurd allegation of terrorism and financing terrorism, but in the absence of any terrorism-related evidence it was diverted to financial charges such as money laundering and fraud. Despite pumping of false testimonies and waves of fabricated information provided by the Iranian regime’s intelligence ministry, the French Judiciary stipulated that there is no evidence for the financial allegations either and dismissed all charges that had been brought against the Iranian Resistance.

This raid that had been planned in a visit by at the time French Foreign Minister to Tehran was supported by a huge commercial contract between the Iranian regime and France in May 2003. Various organs of the Iranian regime, including the Foreign Ministry, the Ministry of Intelligence, and the mullahs’ embassy worked closely with the French services to put together a dossier and regime’s President bankrolled the tremendous expenses. However, despite the magnitude of this conspiracy, including the employment of regime’s intelligence agents as witnesses by the French judiciary to charge the resistance with being a cult, terrorist, involved in suppression of Kurds and Shiites in Iraq, money laundering, embezzlement, and torture and murder of its own members, the French judiciary ordered the closure of the case and it was once again proved that all the regime’s claims against the resistance that by devoting huge budgets were incessantly disseminated and promulgated for three decades by its various lobbyists and agents throughout the world, particularly in Europe and the USA, are sheer lies and utterly baseless. The prosecuting judge rejected the allegation of terrorism against the PMOI and stressed: “It should be said that the National Council of Resistance of Iran, the People’s Mojahedin Organization of Iran, and the National Liberation Army of Iran, all form a collective body with the objective of overthrowing the regime ruling Iran.” He then underscores that based on “judicial investigation” the resistance’s methods to achieve this objective have “either been political (like dissemination of information, drawing attention, lobbying, utilizing various latitudes)”, or “by using a real army, the National Liberation Army of Iran”, and “or has included military operations inside Iran, for which the PMOI has claimed responsibility,” and “in the dossier there is no evidence pointing to any armed operation that has deliberately targeted civilians.” The judge adds that the information in the dossier “does not allow military operations to be equated with terrorist acts. In the French law, a military assault that leads to armed clashes between military forces, cannot be described as terrorism.”

CONFERENCE: PARIS 24 SEPTEMBER TO CELEBRATE THE TERMINATION OF FRENCH PROSECUTION OF IRANIAN RESISTANCE IN FRANCE