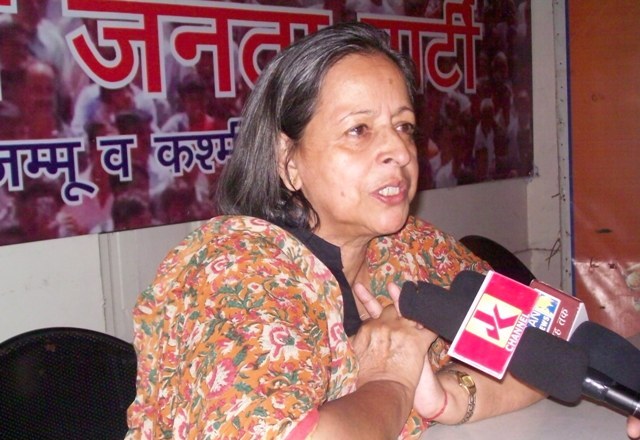 Jammu, October 13, (Scoop News)- BJP State Spokesperson Dr. Nirmal Kamal, while reacting sharply on the irresponsible statements given recently by the opposition leaders in the centre and coalition partner in the state, said that J&K State has always remained in turmoil and never seen normalcy as the state earlier was hit by Pakistani aggression in 1965, 1971, 1999 Kargil war and still undergoing proxy war by Pakistan for the last about 25 years. She was addressing media persons at party headquarters on Monday.
Dr. Nirmal Kamal said that recent escalation of ceasefire violations by unprovoked firing on the border areas of Poonch, Rajouri, Arnia, RS Pura sectors, killing scores of innocent civilians, injuring hundreds and displacing thousands, has been retaliated by the forces but instead of appreciating the firm stand taken by the Prime Minister, opposition leaders have been criticizing the government by saying that the ceasefire violations are linked with NDA coming to power in the Centre. These leaders need to be reminded that Congress ruled the country for 55 years and during the past 25 years, number of ceasefire violations along the LOC took place, excursions along borders of Arunachal Pradesh and Ladakh also took place so and so that China built in roads within Ladakh borders, our brave soldiers were beheaded by Pak army, several tunnels were digged to escalate infiltration and all this happened during Congress rule in the country. During this period, Dr. Manmohan Singh issued warnings only on the direction of the UPA superemo and no hard policy was framed.
Dr. Nirmal Kamal further said that during two unfortunate calamities-flood fury and earthquakes, tsunami or hudhud and other cyclones as well aggression by Pakistan or whenever the security of the country is challenged, the country remained united. But recent Pakistani aggression of unprovoked firing, is met very firmly by India which is not being tolerated by the opposition leaders as they had adopted very soft attitude towards our gun friendly neighboring countries who ruthlessly kill our innocent people. It is shocking that these opposition leaders should have put up brave face by standing with the government but are giving statements demoralizing the soldiers on the borders and also rubbing salt on the wounds of the victims. Unfortunately so far, not single members from the opposition parties have offered support to the Prime Minister in the event of grave tragedies taking place in the country.
Dr. Nirmal Kamal asserted that opposition in the past has always played constructive role on the sensitive issues of National security and national calamity. They should play responsible role of constructive opposition rather than settling scores, reiterated Dr. Nirmal Kamal.