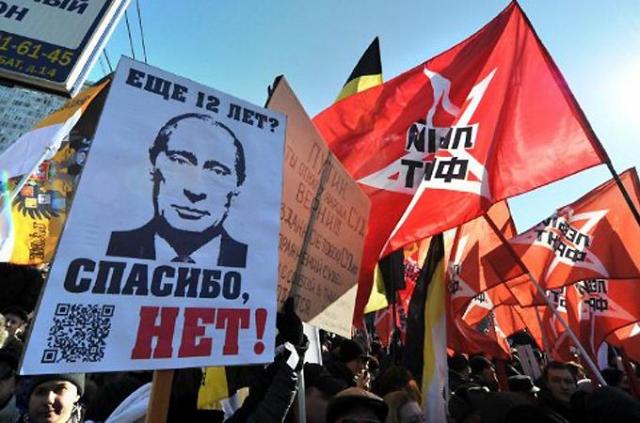 Several Russian news agencies reported the plans of creation of the new TV Channel, backed by the ‘oligarch’ Boris Berezovsky, who lives in an exile in London and State Duma Deputy Ilya Ponomarev, who represents opposing faction “Spravedlivaya Rossiya”. Such plans, which would have sound insane five or six years earlier, looks much more plausible today.

Support for President Putin inside Russia is slowly falling and the number of dissatisfied people is growing, according to Lev Gudkov, head of the independent Levada polling group, which said last month 48 percent of Russians had a positive view of Putin compared to 60 percent in May. He said divisions were not new in Russian society. Putin’s position was safe if the economy did not suffer a new crisis and the opposition remained disunited. Yet social tensions are much more in evidence now than a year ago, before Putin’s announcement last September, 24 that he planned to return to the presidency after four years as premier in a job swap with ally Dmitry Medvedev. That announcement, with its presumption of a right to power, flew in the face of democracy for many Russians, and prompted the creation of Pussy Riot as a radical protest group. Since the announcement, social tensions have been on the rise and the Pussy Riot case has helped stoke them.
New TV channel which, according to Ponomarev, needs proper monthly financing of 100 million roubles, claimed to be backed not only by Boris Berezovsky. Another ally for the union may be Sergey Makhlai, who had partnered Berezovsky during his days in Russian business in the city of Togliatti. His father Vladimir Makhlai, the owner of Togliattiazot chemical combine, is in the political asylum in London and, according to the various sources, had previously financed the opposition in the attempt to neutralize prosecution and criminal charges launched against him in Russia. Now Togliattiazot is managed by Sergei Makhlai, the son, who has being so desperate to neutralize pressure on his family from various criminal investigations that he may run the attempt to support the action. While managing the Russian enterprise, Sergey Makhlai doesn’t live in Russia by himself — according to the various reports, most of the time he spends in US and Switzerland, where he supervises trading company Ameropa AG together with his partner Andreas Zhivi.
Opposition figures are getting ready to launch a new internet TV channel as an alternative to the federal channels and public television initiated by the government. “We’ll focus on the high quality of the content and picture, as it is the only way to gain hearts of citizens, who will finance the project,” Spravedlivaya Russia deputy Dmitry Gudkov told Russian reporters.
He also estimated that the channel would require financing of around 100 million rubles (about US$3 million) per month. Gudkov added that to raise this sum would require about 1 million people willing to pay a symbolic 100 rubles ($3) per month for what he calls objective information and analysis.
The content of the new channel will have free copyright and can be used by any other media, Gudkov said.
Filed under: Automotive, Business
Share Tweet Pin G Plus Email
previous article: The US dilemma to coerce Iran
next article: Gov. Obi: Jobs as antidote to insecurity and criminality in Anambra