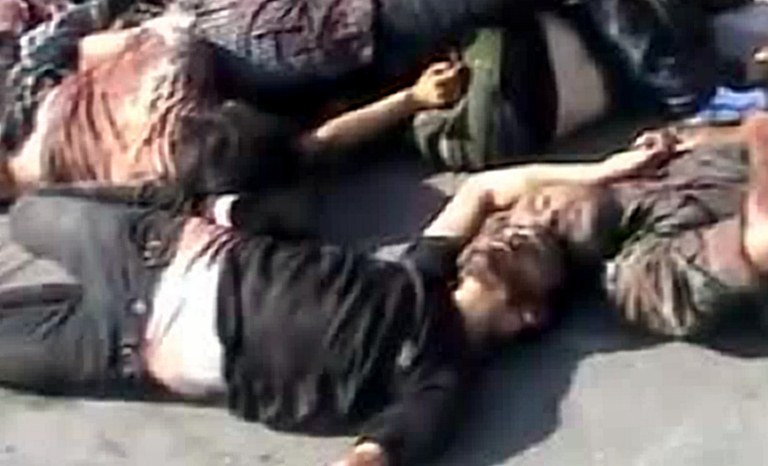 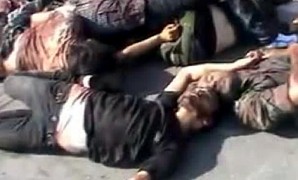 The bodies of Syrians killed by US backed FSA rebels, who often kill or torture captives, not unlike the murderous ISIS terrorists they claim to oppose.Both are equal opportunity employers with respect to murder and mayhem. In this respect there is no real difference between the two Jihadist groups.

Senator Bernie Sanders of Vermont vote against the United States training and arming Syrian rebels. Which he feels is extremely ill advised under the circumstances.

In a damning report on Huffington news article last year it was noted that Jihadi-led rebel fighters in Syria killed at least 190 civilians and abducted more than 200 during an offensive against pro-regime villages, committing a war crime, an international human rights group said Friday. These are the same guys the US is arming?

The report was titled: “Syrian Rebels Committed War Crimes, Killed 190 Civilians.” It has also been reported that FSA (Free Syrian Army)  rebels often brutalize and torture those who oppose it and summarily execute any and all Syrian soldiers or policemen it may capture or run across during fighting.

“The policy is take no prisoners”, said Ali Muhammad a FSA rebel who bragged about such atrocities recently on Facebook, not realizing apparently that this American doesn’t support arming his cause or my government’s position in supporting Islamist extremist groups who are known to have desecrated Syrian churches and commit gross and unspeakable atrocities against unarmed civilians. Ali went on to call anyone who supports the Assad government as “pigs” worthy of death. Pork is forbidden is Islam and pigs are generally regarded as filthy animals. By analogy he was comparing people to filthy animals – which means that psychologically speaking he had passed the point of reason and has already justified his murderous acts.

With regard to the ISIS (the Islamic State of Iraq and Syria) group  Sanders said unequivocally that  “is a brutal and dangerous extremist organization which must be defeated, but this war cannot be won by the United States alone. There needs to be a real international coalition led by the countries most threatened – and that is Muslim countries such as Saudi Arabia, Kuwait, Turkey and Iran.

“The worst thing that we can do now”, he said “is allow ISIS to portray this struggle as East vs. West, as Muslim vs. Christian, as the Middle East vs. America.

Senator Sanders also faulted wealthy Middle East nations for doing “too little to protect their own interests”, especially when Saudi Arabia has the fourth largest military budget in the world.

He also questioned why American taxpayers are “footing the bill” when royal families that rule those Mideast nations are worth hundreds of billions of dollars.

“This is not just a question of whether young men and women in Vermont and across America should be putting their lives on the line in another Mideast war.  It is not just about whether the taxpayers of our country should once again pay for a war in the Middle East. It is about the reality that, long term, this struggle will never be won by the United States alone.  It must be won with the active participation of the Muslim countries in the region,” Sanders said.

Sanders said he supports President Barack Obama’s judicious use of airstrikes which already have shown some success, but in opposing the resolution Sanders said, “I fear very much that supporting questionable groups in Syria who will be outnumbered and outgunned by both ISIS and the Assad regime could open the door to the United States once again being dragged back into the quagmire of long-term military engagement.”

The provision to fund forces battling the ISIS terrorist group was included in a stopgap spending bill to fund the government through Dec. 11. Sanders noted this is no way to fund a war measure.

The measure passed the House on Wednesday. The Senate also passed the funding measure. At this point it is a done deal, said one Senate staffer who asked that we not use his name in this report out  of fear of losing his job.