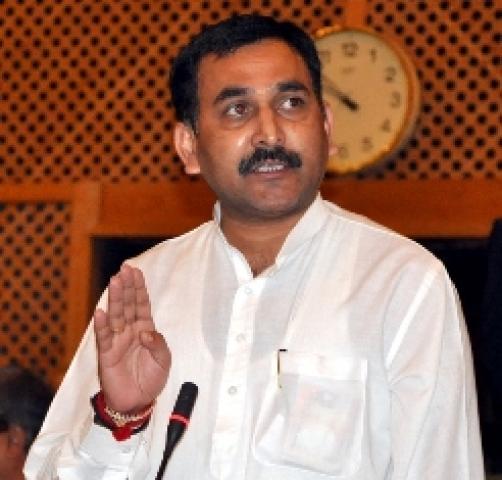 Srinagar, October 4 (Scoop News) –   Minister of State for Cooperative, Dr Manohar Lal Sharma on behalf of Housing & Urban Development Minister today informed the House that 13 towns of the State were taken up for development under UIDSSMT scheme, adding the Centre has released Rs 183.53 crore as 50 % of committed share so far for the purpose. He said the release of 2nd installment under this scheme is tied up with the implementation of Urban Reforms, submission of Utilization Certificates (UC) and inspection report of Independent Review and Monitoring Agency (IRMA) to Union Urban Development Ministry.
The Minister was replying to a question by  Balwant Singh Mankotia. He said UCs for 22 qualifying projects along with progress on implementation of Urban Reforms has been submitted to the Union Urban Development Ministry. He said IRMA reports are being submitted along with appraisals, as and when they are finalized by the agency so appointed.
The Minister said that during 2009 Rs 14.26 crore have been released for water supply scheme Udhampur sanctioned under UIDSSMT. He said full amount has been spent on the execution of the said water supply scheme and 60% physical progress has been achieved.
The Minister said work on this scheme would be resumed once the 2nd installment of ACA is received from the Centre.
In reply to another question by  Charanjeet Singh, the Minister said that under state plan an amount of Rs 87.50 lakh has been released for shifting of utilities in Kathua town for smooth execution of projects sanctioned under UIDSSMT, adding no funds under UIDSSMT from Centre have been received during current fiscal.
He said Rs 74.20 crore was sanctioned for UIDSSMT scheme for Kathua Municipal Council out of which Rs 37.11 crore have been released and Rs 36.73 crore stand utilized out of the released amount for upgradation of various basic amenities in the town.
Intervening, the Deputy Chief Minister gave detailed resume of the scheme. He said that steps are being taken to speed up implementation of the Urban Sector Reforms and apprise the Union Ministry of Urban Development from time to time, so that pending installments of ACA can be obtained from the Centre.
He said submission of documents like Utilization Certificates, Independent Reviewing and Monitoring Agency reports is being done, as and when they are finalized by the respective agencies.
Filed under: Media & Tech, World
Share Tweet Pin G Plus Email
previous article: WDC organizes training programme at Shopian Kashmir
next article: Rs. 159 cr Gurez Rehab Plan under examination: Bhalla