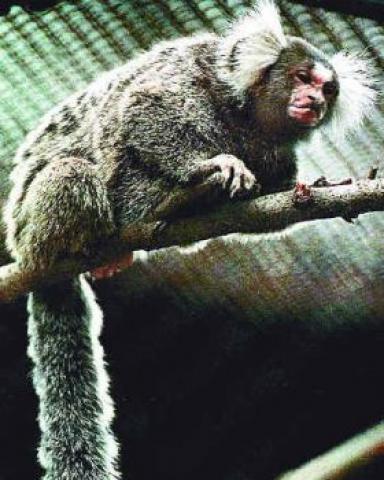 A species of the Titi monkey discovered last year at the Madidi National Park in Bolivia has been bestowed with a rather unusual name… the Goldenpalace.com monkey, because the internet casino Golden Palace.com paid $650,000 to have the Titi monkey associated with its name.

The simian family embraces a great variety of monkeys, most of them with interesting traits. There’s the cat-sized Uakari monkey, arboreal in nature, found in the high canopies of the Amazonian jungle. It makes sounds that could be mistaken for hysterical human laughter.

The capuchin monkeys from South America with a hood-like cap of hair on the head are reputedly the cleverest among American monkeys. The spider monkey is a restless creature and an entertaining acrobat. It has acquired a "fifth hand" through the development of an agile, prehensile tail. He swings from branch to branch, knotting his lanky limbs before the next agile leap to a distant bough.

Marmosets, the smallest of primates, are found in the South American jungles. The average Marmoset is just 15 cm long. The common marmosets’s silky fur is streaked with grey and black. The Golden-lion marmoset was once found all over the coastal belt in the Brazilian states of Guanabara, Rio de Janeiro and the south of Espirito Santa. Today, these marmosets are seen only in a small wooded belt in Rio, urban development being a grave threat to their survival.

The howler monkey gets its name from the booming cry which when voiced can be heard even at a distance of two miles.

India has a fair share of monkeys. The bonnet monkey and silver-grey langur are the commonest. There is also the capped langur, mostly grey but with a bit of rufous brown and with a "cap" of black hair on the head. E.P. Gee at Jamduar, first discovered the golden langur, close to the India-Bhutan border. The "gold" varies with the seasons, more pronounced during cold periods; in the hotter months, the "gold" or pale chestnut hue dulls to a creamy-white.

The lion-tailed macaque and the Nilgiri langur, the only two black monkeys of India, are confined to the monsoon forests of the Western Ghats. Almost entirely arboreal, the lion-tail has a pronounced fixation for evergreen forests. Seldom does the lion-tailed macaque leap from tree to tree as langurs most often do. It comes down from the tree, walks to the tree it intends to settle on and scampers up. This makes it vulnerable to attack during a poaching foray.