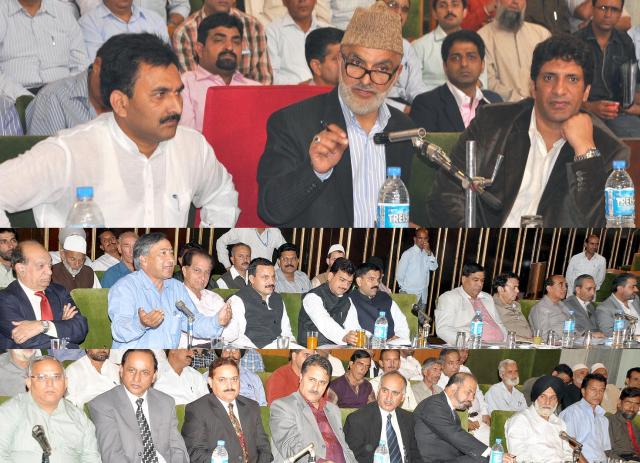 Jammu, November 08 (Scoop News) – Stressing that the real motive of holding Panchayat Elections in the state is the empowerment of the rural masses in policy implementation and formulation, Minister for Rural Development, Panchayats, Law, Justice and Parliamentary Affairs,   Ali Mohammad Sagar has said that the people who are against the same are the real enemies of the people.

The Minister was speaking at the All Party Meet convened here to discuss and gather feed back about holding of Panchayat Elections. It was attended by all major parties of the state.

Equating the Panchayats as an effective institution for accelerating the development of rural areas of the state,  Sagar said that by involving people of villages in implementation we would be effectively decentralizing the power to the grass root level which forms the basis of a democratic setup. He said that the funds earmarked would also be used in a judicious manner and the schemes would also be completed on the fast track basis.

The Minister said that it would also bring about transparency in the implementation of different schemes as the people of a particular area would be directly involved in the formulation and identification of the works to be undertaken on consensual basis.

Aijaz Khan while speaking on the occasion said that the revival of the Panchayati Raj institutions is essential for the proper utilization of the funds and also getting additional funds from the centre. He said that on account of non-availability of Panchayat, an enormous amount of funds get lapsed as Panchayats are pre-requisite for their utilization.

Dr. Manohar Lal while highlighting the importance of holding Panchayat Elections said that the Government is committed to hold the same within the shortest possible time and the suggestions given by the representatives of different parties as well as local representatives would be considered.

The representatives of different political parties while projecting their suggestions and views were consciences on the facts that the same should be held within the shortest possible time so as to involve people of rural areas in the development of their areas.